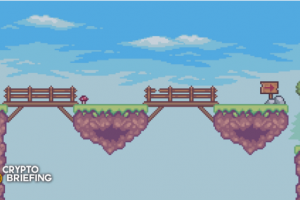 The Polkadot ecosystem welcomes a new NFT network launched by Enjin. The new platform will foster blockchain interoperability, increasing the liquidity of both protocols.

Enjin is ready to launch a next-generation NFT blockchain on the Polkadot network after an $18.9 million private sale. Dubbed Efinity, it will enable highly scalable transactions for games, apps, enterprises, and creators.

Caleb Applegate, COO at Enjin, affirmed that building Efinity on Polkadot was a no-brainer. The blockchain’s speed made it possible to “deliver an accessible and scalable solution” for the NFT economy.

Indeed, the game-channel network is set to process transactions every six seconds under a proof-of-stake consensus algorithm that can scale to 1,000 transactions per second.

Enjin is also developing a new advancement of its ERC-1155 NFT standard, called Paratoken. The cross-chain token will be the bridge for any fungible or non-fungible token used in the Polkadot ecosystem.

Efinity is expected to expand the Enjin Coin and Polkadot network’s utility since it will open up liquidity and connect a broad ecosystem of creators, buyers, and sellers.

Market Participants Have Yet to React

Despite the significance of the announcement, ENJ and DOT have yet to react. These cryptocurrencies have been consolidating within a narrow range without providing a clear signal for where they are heading next.

Enjin Coin’s lackluster price action caused the Bollinger bands to squeeze within the 12-hour chart. Many technical analysts view squeezes as stagnation periods that are usually succeeded by notable price movements. The longer the squeeze, the more violent the breakout that follows.

Given this technical index’s inability to provide a clear path for the direction of ENJ’s trend, the area between the lower and upper band is a reasonable no-trade zone.

Only a 12-hour candlestick close above or below any of these critical price hurdles will determine whether the bulls or bears can take control of Enjin Coin.

Slicing through the overhead resistance at $2.64 would likely be followed by a spike in buy orders. Under such circumstances, ENJ will resume its uptrend and advance to the 1.272% Fibonacci retracement level at $3.50.

Conversely, a spike in selling pressure that pushes Enjin Coin below the $2.00 support level could lead to a downswing towards the 100 twelve-hour moving average at $1.50.

Like Enjin Coin, Polkadot is also going through a stagnation phase. Its price has mostly traded between the $30.00 support and the $39.80 resistance over the past week. Such market behavior led to the formation of a parallel channel on the 12-hour chart.

Each time DOT has risen to the channel’s upper boundary at $39.80 since Mar. 22, a rejection occurs that pushes prices to the lower edge at $30.00. From this point, it tends to rebound, consistent with a channel’s characteristics.

Even though parallel channels offer excellent opportunities to profit given the predictability of the price action, these technical patterns fail to indicate which direction the trend will result. For this reason, experienced traders tend to wait for a clear break outside of the channel before entering a trade.

Two price targets emerge by measuring the channel’s width and adding it to the potential breakout points. On the upside, Polkadot will rise to $53.00 if it slices through the $39.80 resistance. But if DOT closes below the $30.00 support, a downswing to $22.50 can be expected.

Given the indecision that both Enjin Coin and Polkadot present, it is imperative to wait for a decisive 12-hour candlestick close above resistance or below support before entering any trade.

Disclosure: At the time of writing, this author owned Bitcoin and Ethereum.