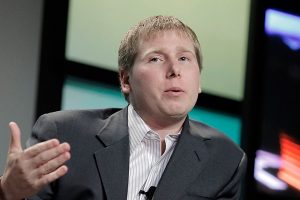 A former Barclays analyst has been handed the job of leading the world’s biggest crypto-fund manager after being named as Grayscale Investments’ new chief executive. Michael Sonnenshein, who has spent the last seven year in various roles at Grayscale, has assumed the post as CEO and founder Barry Silbert steps down.

Grayscale Investments, a unit of Barry Silbert’s Digital Currency Group, closed 2020 with a $20 billion in crypto assets under its wings. The data suggests that institutional investors, dominated by hedge funds, have been scooping up Bitcoin products, despite a historically tumultuous market.

The company’s publicly-traded funds offer institutional investors the opportunity to trade crypto on the stock market, with most of the funds poured into the Grayscale Bitcoin Trust.

Grayscale will see a shift in its executive leadership as founder Silbert wants to focus on other initiatives of Digital Currency Group, which also owns OTC crypto trader Genesis Trading, and cryptocurrency news site CoinDesk.

Silbert has been also a big backer for the Ethereum Classic (ETC), which its market cap grew to nearly $3 billion in 2017, before falling back within a broader selloff across the ‎cryptocurrency markets.‎

Prior to DCG, Barry was the founder and CEO of SecondMarket, a venture-backed technology company that was acquired by Nasdaq.

Grayscale has previously filed with the Securities and Exchange Commission to list its Bitcoin Investment Trust as an exchange-traded fund in a $500 million initial public offering. The request was filed in 2017, only to withdraw after the SEC denied the Winklevoss ETF.

Grayscale’s new CEO, Michael Sonnenshein, has been with the New York-based crypto-fund manager since 2014. During this long stint, he worked his way up through several senior roles with the firm, culminating with the position of managing director.

Prior to that, a three year tenure as Associate with US investment bank J.P. Morgan took his career career between 2011 and 2014, preceded by two years at Barclays as an analyst. He has originally started his career in the finance industry at Bank of America back in 2008.

Commenting on the news, Barry Silbert said: “Grayscale has been at the vanguard of bringing digital currencies to the mainstream, and I could not be more proud of the results the team has achieved since the firm was founded. When Michael joined the firm seven years ago, we had one product and $60 million in assets under management. That accomplishment would not have been possible without Michael’s unrelenting passion for our business and his commitment to making the digital currency asset class available to a broader base of investors.”