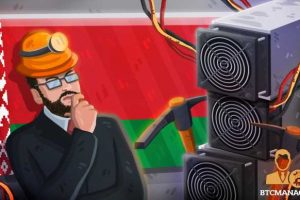 The Belarus government is exploring the prospects of tapping into the crypto mining industry to utilize its excess energy supply.

Crypto Mining on The Agenda

Belarus Energy minister Vikto Karankevich confirmed this development during a meeting with other energy stakeholders in the country. When quizzed on the prospects of using the country’s energy reserves to mine cryptocurrencies. Karankevich was positive with his reply and stated that the government was looking towards creating mining farms.

He further commented that other countries globally had developed mining industries successfully. “China mines the most bitcoin. Most of the world’s largest mining pools are located in this country. It accounts for 65% of the total network capacity. Mining farms are also developing in the USA, Canada, Russia, and other countries”.

Karankevich concluded that the government was looking towards creating a detailed study on mining and the potential risks involved. It is interesting, but to start it, we need a detailed, comprehensive study of this issue, including assessing possible risks associated with this type of activity. He added.

Belarus is known to have a healthy approach towards cryptocurrency and blockchain technology with its robust regulatory framework. In 2017, Alexander Lukashenko, the President of Belarus, signed a decree legalizing bitcoin and other cryptocurrencies.

Since then, the government has continued to make friendly policies and promoted crypto-adoption in the country. Its largest bank, Belarusbank, opened a crypto exchange service in November 2020.

This latest development could suggest that the country is looking to explore crypto mining commercially. Belarus has huge nuclear reserves and produces more energy than it can consume, which can be channeled to mining farms.

The crypto mining industry is one sector that has generated a lot of attention from governments across the world. This is because of the potential profits that can be generated from mining valuable coins like Bitcoin and Ethereum.

Recently the Ukrainian government was reported to be planning to build Bitcoin mining farms next to nuclear power plants. Also, in January, it was revealed that a regional government in Pakistan had begun to mine bitcoin. These developments show the growing adoption of crypto-mining in countries with excess energy generation.