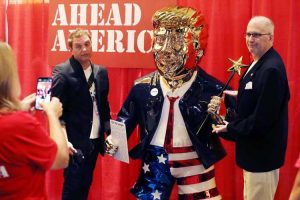 A golden statue of Donald Trump is being wheeled around an annual conservative political conference where the former president is expected to speak on Sunday in his first public appearance since leaving office.

The statue, which features a cartoonishly large head and American flag shorts, was spotted at the Conservative Political Action Conference in Orlando and soon spread around social media.

"They've literally made a golden calf! This would be a good time for CPAC attendees to read the Second Commandment," wrote Washington Post columnist James Hohmann.

"The golden calf jokes aren't subtle and wry when they make it all obvious like that," tweeted Rabbi Danya Ruttenberg, a columnist for MSNBC.

And Molly Jong-Fast, the editor at The Daily Beast, called the Trump statue "so very on brand" for the annual CPAC gathering.

Trump himself is scheduled to deliver remarks Sunday. Some pro-Trump CPAC attendees were heard relishing the statue of the former president, according to a widely shared video from Bloomberg reporter William Turton.

"That is so cool!" one person says.

"Four more years!" another adds, while others can be heard laughing or seen taking photos.

"Two years ago, when I saw all those statues of naked Trump and Trump on a toilet, I said, 'You know what? I can do better,' " Zegan told the network.

He said that he would be "ecstatic" if Trump decided to run for president again in 2024 after leaving office under the cloud of the deadly U.S. Capitol attack by a mob of his supporters.

"If he wants it to happen, it will happen," Zegan said.

After chastising Trump as "practically and morally responsible" for the Capitol rioting, Republican Minority Leader Mitch McConnell told Fox News this week he would "absolutely" support another Trump bid, should Trump win the nomination in three years.

And Utah Sen. Mitt Romney, a longtime Trump critic, acknowledged to The New York Times that the former president will "continue playing a role" in the fractured GOP, of which Romney now represents a "tiny wing."