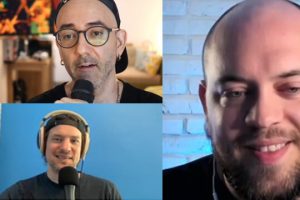 CoinGeek’s resident Bitcoin Historian Kurt Wuckert Jr. was a guest on the Mapping The Course show, giving his views on the role of the BSV enterprise blockchain, and how it differs from other blockchain in key aspects.

He began by explaining the BTC, arguably the most commonly familiar blockchain, simply exists as a tool for value storage. Early bitcoiners were of the opinion that fiat currency needed to be replaced. BTC sees Bitcoin as a tool for replacing gold. BCH, on the other hand, sees it as a form of money with value, but neither BTC or BCH ever move beyond this notion of Bitcoin as a tool for peer to peer commerce.

Wuckert said that those behind BTC and BCH both consider the additional capabilities of the original Bitcoin protocol to be somehow detrimental to its use as money—a belief that lies in the assumption that Bitcoin must be as decentralized as possible, and that the costs of running individual nodes need to be as low as possible to support this mission.

By contrast, BSV, which retains the original vision as set out in the Satoshi Nakamoto whitepaper, views Bitcoin as a general purpose tool. BSV believes any and all commerce should be done on Bitcoin with no artificial limits. If someone wants to push an entire operating system onto the blockchain, they should be able to do that, without some artificial block size limit. Wuckert described BSV as a perfect free market system, where it isn’t up to a self-appointed elite at the top of the pile to determine how others are allowed to use and compete on the technology.

In surmising the differences between the factions in the Bitcoin community, Wuckert said that both BCH and BTC overlap on the concept of having more nodes. From the perspective of BTC, both BSV and BCH take a more ‘big block’ view—that the block size needs to be bigger to facilitate more transactions. But he was keen to point out that while this is a distinction with BTC, BCH still has absurdly small block sizes, and is still wholly unsuitable to reflect Satoshi’s whitepaper vision.

He described how BTC has effectively wiped out half of the whitepaper, in its mission to narrow down the scope of what their version of Bitcoin can do. Yet according to the whitepaper, and the BSV community, Bitcoin is the internet—it is the protocol on which a whole ecosystem of apps and other innovations can be powered.

ETH is currently popular because its developer ecosystem is familiar for developers—but if you need a business at scale down the road, Wuckert said this just isn’t possible on ETH.

So why is BSV much better? Wuckert said that while ETH is good for 15 transactions per second globally, this wasn’t anywhere near enough to run any business application at scale.

BSV already shows more real-world use. On the current network, some 50k transactions per second can be processed on the BSV network, which is already more than the capacity of Visa. With the upcoming Teranode in the final stages of implementation, 1 million/second will be possible—something Wuckert envisages as being in place by the end of this year.

He notes that while there’s no demand for this level of scale yet, it just shows the kind of throughput that could replace all payment networks combined, courtesy of BSV blockchain. As things stand today, BSV could already rival Visa, and it’s only getting bigger.