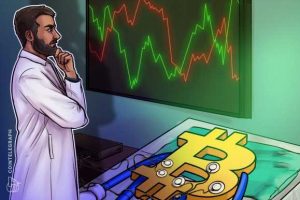 Despite BNY Mellon’s entrance into Bitcoin (BTC), the CEO of one of the company’s asset management units is still sceptical about major risks associated with the world’s largest cryptocurrency.

Francesca Fornasari, head of currency solutions at BNY Mellon’s subsidiary Insight Investment, believes that Bitcoin may not be suitable for most institutional investors due to extreme volatility, low liquidity, governance issues and environment-related risks.

In a Tuesday Bloomberg interview, Fornasari said that Bitcoin can be more difficult to evaluate than gold due to its massive price swings, which further complicates its possible reactions in an inflationary environment.

“At the end of the day, you should be aware of the fact that if you’re investing in Bitcoin, there’s a whole number of different factors and considerations that are going to affect the value of your investment, that have nothing to do with inflation or inflation hedges,” she said.

The foreign exchange expert stated that Bitcoin’s slow and expensive transactions could be a major impediment to mainstream adoption. “We’re skeptical in terms of the ability of Bitcoin to take over as a means of payment,” Fornasari said.

However, Insight Investment is optimistic about altcoins, or other cryptocurrencies than Bitcoin and expects to see a rise in such digital assets, particularly those that solve issues like the speed and cost of transactions, energy usage and volatility, according to Fornasari.

Insight Investment is one of the largest global asset management companies with around $1 trillion in assets under management. The company has been a subsidiary of BNY Mellon since 2009 after the U.S. banking giant acquired it from Lloyds Banking Group.

The firm’s sceptical stance on Bitcoin comes despite BNY Mellon actively moving into Bitcoin after the bank announced its plans to custody and transfer Bitcoin and other crypto as an asset manager in February this year. The firm also argued that underperformance of one of its exchange-traded funds was caused by the lack of exposure to companies investing in Bitcoin.