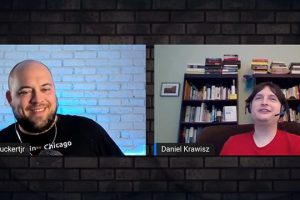 This week’s guest is Bitcoin and Blockchain author and a co-founder of Nakamoto Studies, Daniel Krawisz.

Daniel, who considers himself an economist rather than a philosopher—something most people regard him as—gives in-depth analyses, insights and analogies on the Bitcoin economy in this episode of CoinGeek Weekly Livestream.

As Daniel tells Kurt Wuckert Jr., the concept of gauging Bitcoin’s value is flawed. “Bitcoin is not a measuring stick of value because the disvalue of the coin relative to the total economy will change.” He said the same applies to fiat currency—the idea of keeping it steady is a scam: “There’s no such thing as a stable value because over time, the economy changes not just quantitatively but qualitatively.” Instead he sees money as a concept of efficiency which he believes no longer exists. “We have an economy where nothing is efficient because we don’t know what efficiency is.”

On the contrary, he said Bitcoin has a fixed supply and it gives people a reason to think farther into the future. “I think that over time the Bitcoin economy is going to grow a lot easier than the dollar economy.”

In an analogy, Daniel likens Bitcoin to the black hole that sucks in all the mass—which he equates to money—in the system. “The whole world economy is going to get sucked into Bitcoin, it’s going to be running on Bitcoin eventually.” But in order to make Bitcoin succeed, he says Bitcoiners need to be better cooperators. He cites Dogecoin as case in point of a cooperative system that works. “They have a shared identity, that would be good if we had something like what they’re doing, except that it was an actual economy.” He identifies a cooperative system to be a group of people who do things for each other. “It would be better to stop focusing on people outside and trying to attract them in but rather focus more on each other.”

Kurt and Daniel also discussed whether boosting non-fungible tokens or NFTs would make Bitcoin more valuable. “A boost is just about gaining attention,” Daniel says. “It gives a rational there’s proof of work or upvoted content.” Daniel theorized that the attention gained from NFT’s is just the first round, he says people must like the content so as to entice them to look further in to the network.

In recent months, major banks and institutions around the world have become increasingly keen on the BTC and Ethereum blockchain network. As Daniel explains, there are certain disadvantages in using these networks over the Bitcoin SV blockchain. “In Bitcoin, we do have Byzantine fault tolerance. We don’t have to accept a certain percentage of fraud. And that’s why it works so well… transactions can clear very quickly. So a lot more can happen in the Bitcoin economy than in the credit dollar economy and the credit BTC economy, which is what MasterCard and PayPal are doing.”

To hear more, watch the full episode of CoinGeek Weekly Livestream on YouTube.