The end of the week leads straight into a small rally, which may or may not last. The reasoning behind the rally is the fact that Blockstream launched a satellite that broadcasts the Bitcoin blockchain on the 17th of December, which received good media coverage and impressed a lot of people.

There were other events on the day, but none of them really had the potential to move the markets, so we feel obliged to contribute it to this development.

We are curious to see whether the rally will continue and if the markets recover slightly in expectation on the 10 year anniversary of the launch of the Bitcoin network. 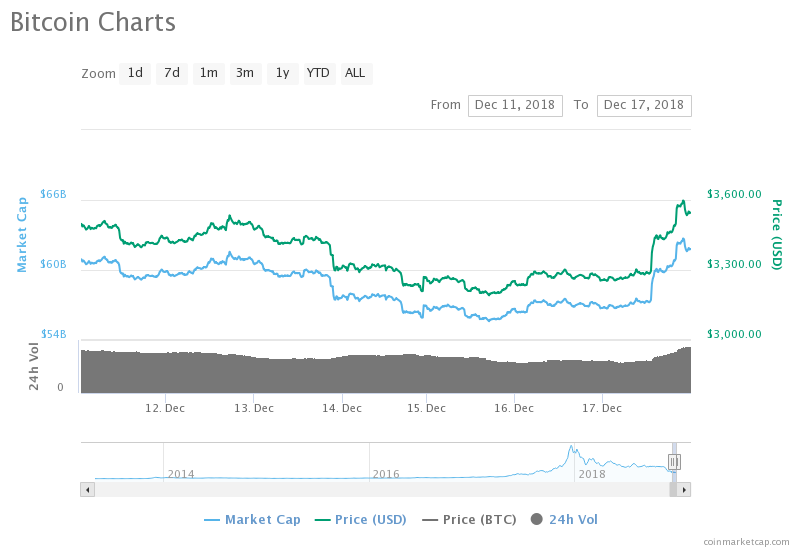 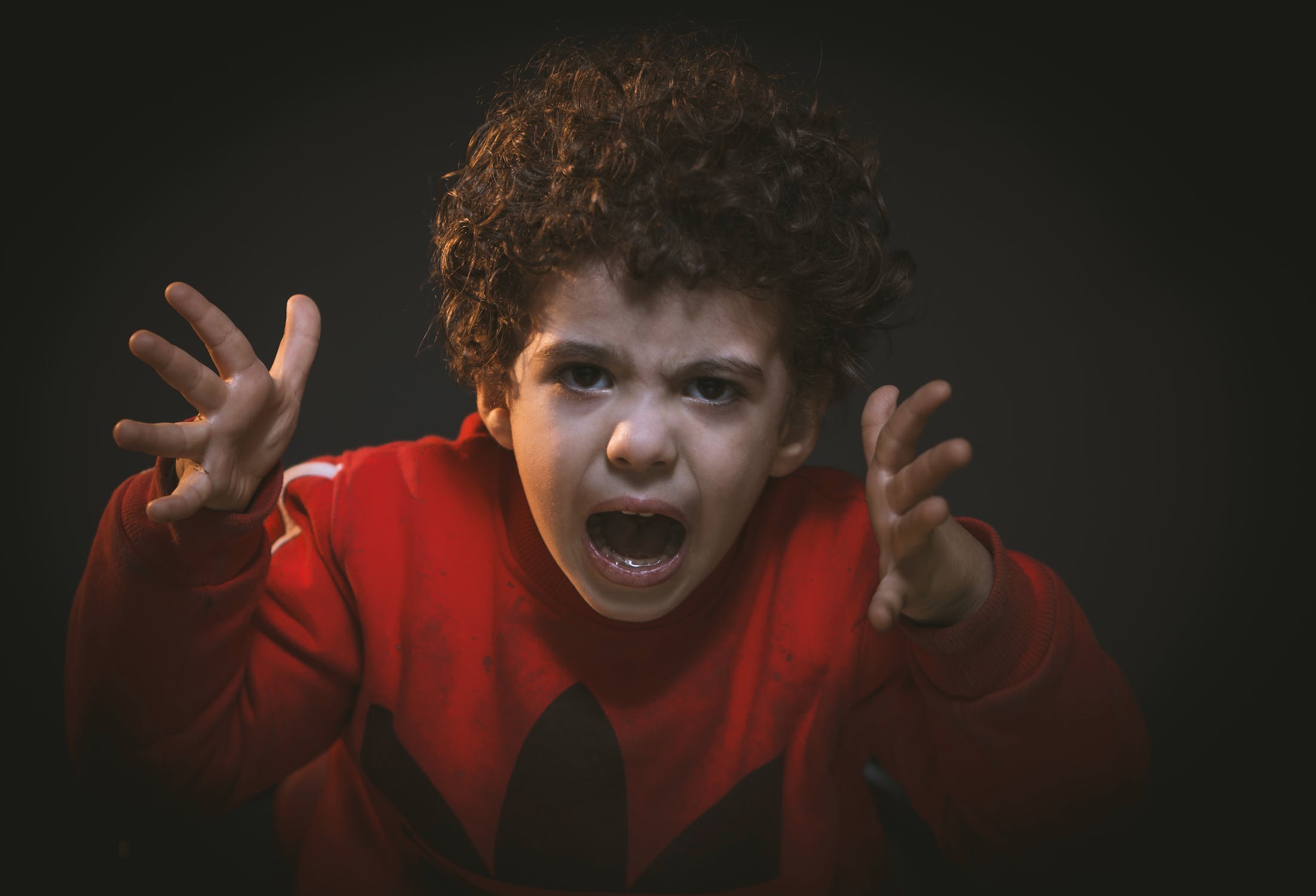 In a rather controversial statement during a panel discussion in London, Allianz Global Investors’ CEO Andreas Utermann explains that he is surprised that regulators haven’t stepped on cryptocurrency harder. Knowledgeable cryptocurrency owners and blockchain enthusiasts are scratching their heads right now in light of this statement. The decentralized nature of cryptocurrencies makes it difficult for regulators to “step in” as Mr. Utermann suggests, at least not without severely damaging the sovereignty, dignity, and privacy of individual citizens. The decentralized ecosystem does not care for regulation, and many of the projects that are striving to be regulatory-compliant are investing energy into the endeavor because of a few different reasons:

There are a ton of decentralized projects which operate without any regulatory oversight and have zero issues with their community, despite their leadership being obscured in anonymity.

We’ve covered this topic in one of our previous articles, the number of Bitcoin miners is getting lower and lower. And that’s great news for everybody that continues to mine Bitcoin regardless of the fact that it’s currently not profitable. The balancing mechanisms of the Bitcoin blockchain track the average time it takes to mine blocks and adjust the mining difficulty accordingly. As the miners leave, it takes longer to mine a single block, and the blockchain is designed to bring this time down to the 10-minute mark.

The effect of the abandonment by the miners however, will result in the temporary deceleration of block production. In the long run however, their disappearance is beneficial to the rest of the network, as they have less competition. One unfortunate side effect of the matter is the following fact. Bitcoin miners do not leave voluntarily. Most likely they are either waiting for profitability to rise into neutral areas, or simply can’t afford to run their machines. This leaves only the “big boys” further adding to the risk of a 51% attack on the Bitcoin network.

The reality is quite different, and things are looking balanced as shown by the hashrate distribution chart below. 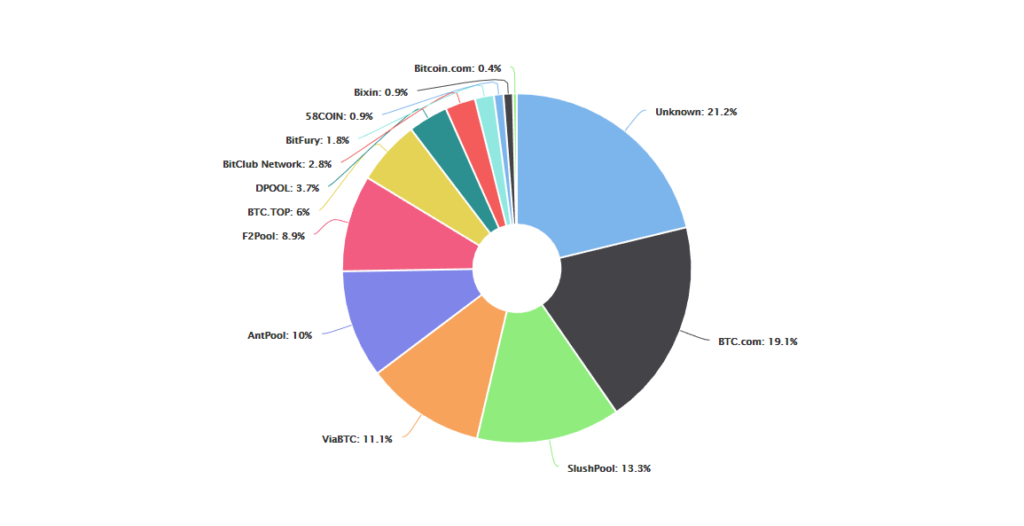 Blockchain development jobs experience the highest growth in the US 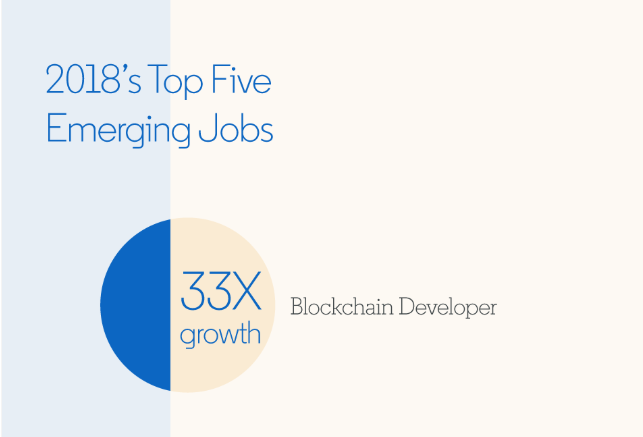 While there is a lot of different information to be found in the report, our audience is particularly interested in everything blockchain-related. This does not come at a huge surprise, with the incredible boom the market experienced last year. If we think about how many companies are not involved with blockchain it makes it easy to understand why blockchain developers are currently the most in tech professionals in the industry. There are trillions of dollars that are actively exchanged, yet these industries do nothing crypto or blockchain related.

The flexibility of the technology represents an opportunity to create something that can cross cultures, industries, and bridge entire “islands”. We’ve written an article about the role of “middleman” that blockchain is replacing, and that’s a pretty good read. The report mentions cryptocurrency twice, and has this to say about blockchain jobs’ current position: Only time will tell if blockchain will be a long-standing trend in the job market…

And it’s entirely true. We do not know if blockchain will be around forever, but it’s certainly hard to imagine a scenario where the technology stops existing. 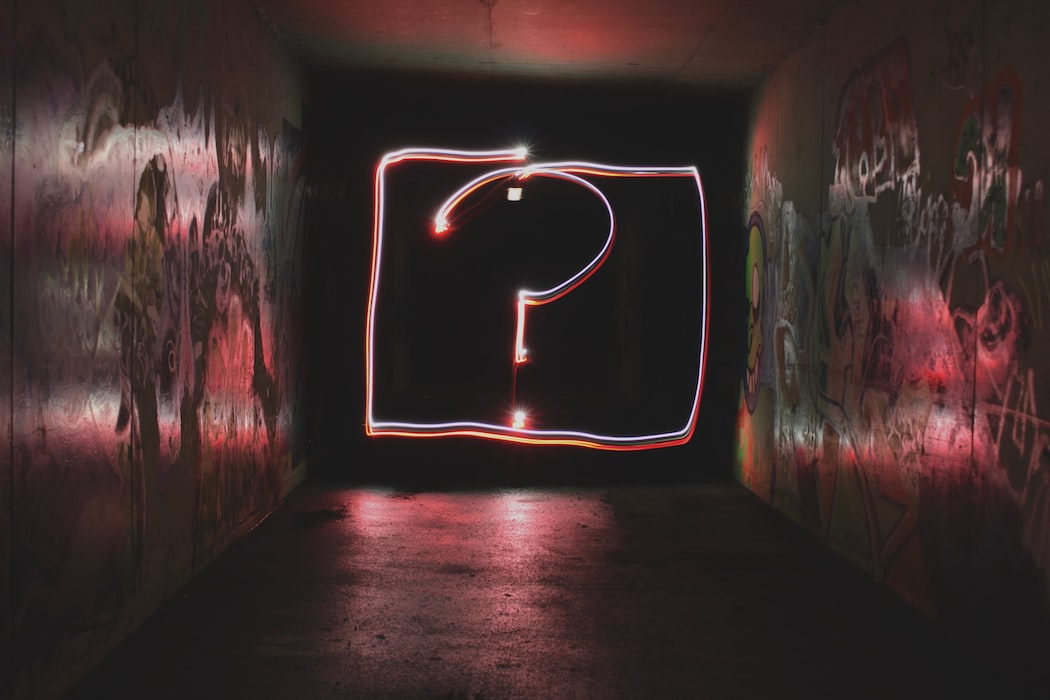 Facebook has been plummeting away, trying to hire as many of the top talents in blockchain and cryptography since the start (and maybe even before) of their blockchain team. Most of these activities have been in secret, through the use of recruiters. According to their job listings Facebook is looking to build a platform that will provide their 2 billion users with something they didn’t have before. The public doesn’t know what their plans are at this moment, and it’s highly likely that it will continue to keep them a secret as it is developing in the background.

What is known is that Facebook has managed to attract former executives from PayPal, and is actually struggling to find high-quality developers that want to sign up with the centralized giant. The theory proposed by Cheddar is that Facebook is building a cryptocurrency for their 2 billion large user base, which would most certainly improve the adoption rates exponentially. There are concerns however, with the fact that Facebook is unlikely to create a completely decentralized cryptocurrency and will most certainly not produce open-source software.

Time will show how the giant will navigate these waters, and in the meantime it is probable that Facebook has been a significant contributor to the LinkedIn report’s results we talked about earlier.

Timothy May, writer of the “Crypto Anarchist Manifesto” & major cryptography contributor passes away 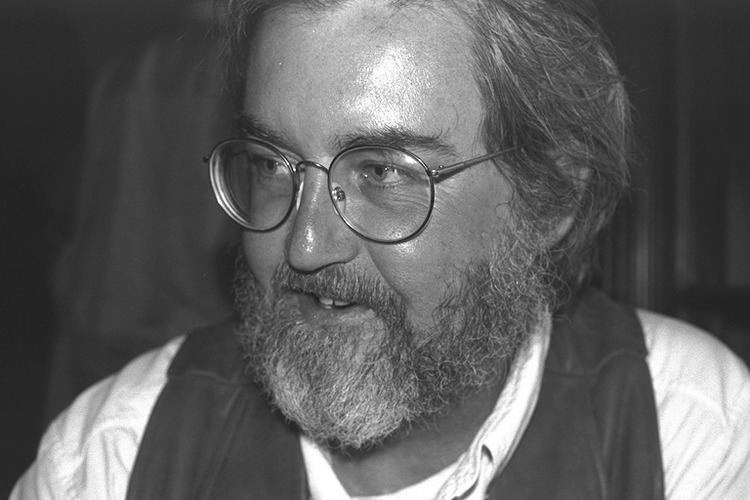 Hundreds of people have shown their condolences and last words for one of the pioneers that was involved in the creation of the Cypherpunks mailing list, an online discussion thread which is believed to have significantly contributed to the development of Bitcoin. Timothy May died in his home on December 15th from natural causes at the age of 67. He’s known to be an extensive writer and he has contributed significantly to the advancement of cryptography and privacy with his work between the early 1990s and 2003.

Known for his works “The Crypto Anarchist Manifest” and “The Cyphernomicon”, he has been the inspiration of many individuals. The entire cyberpunk genre has been influenced by his work as well, which led to the creation of a small number of books. He never got the opportunity to share some of his most private research in a book, an outcome that he regretted.

The report that uncovers trade volume manipulation among crypto exchanges 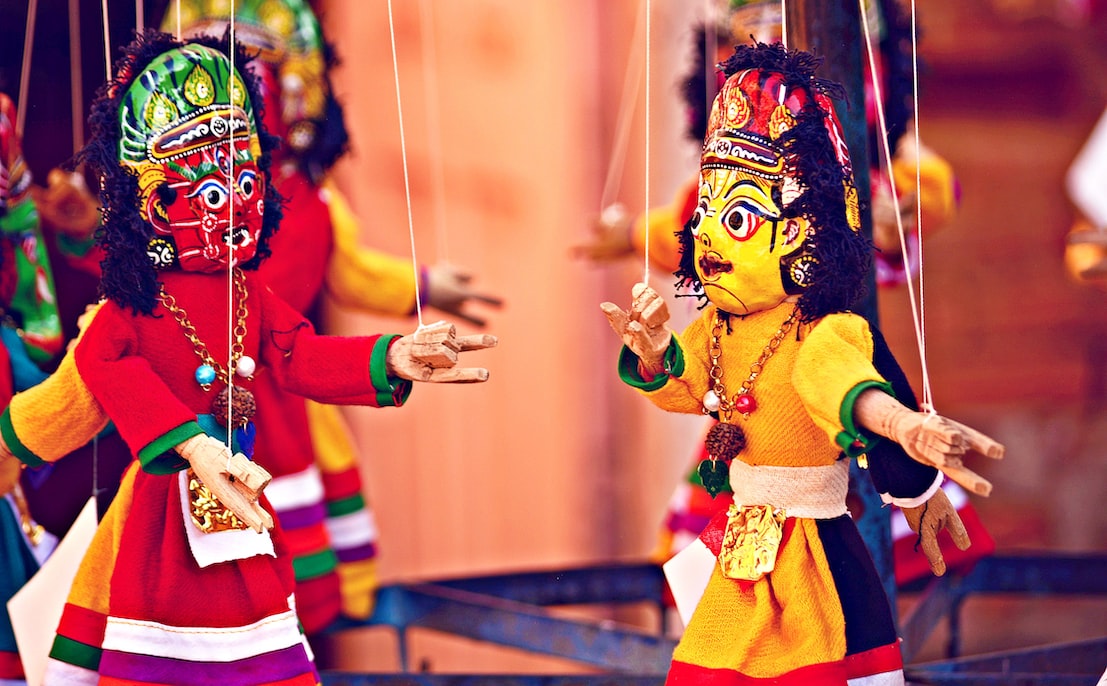 The Blockchain Transparency Institute, as they call themselves, explain that through the use of algorithms and mathematics they have determined that exchanges are washing BTC trade volumes in order to compete to be on the top of ranking websites such as www.coinmarketcap. If true, that would be a disgrace for these exchanges, but it’s highly unlikely to hurt their bottom line. They claim they cannot make the exact data public, which is a red flag, but in all due respect dear reader, this day was real slow.

The discovery that some of these exchanges may have misbehaved themselves is exciting in itself! Some of the exchanges are deemed to be 100% legitimate, which in the case of Binance is a real possibility.

Download the Bitcoin blockchain via satellite, thanks to Blockstream

With the growing size of the Bitcoin blockchain, being able to access it via satellite is a worthy endeavor by itself. This however is not where the potential for this implementation ends. Blockstream has started to broadcast the blockchain from 5 strategically positioned satellites covering all of the livable continents, enabling them to use the blockchain through the use of a satellite connection.

In addition, they are fully embracing the Lightning Network and have created an API that will enable developers to incorporate satellite connections to their software. The functionality of this implementation is expected to grow, as Blockstream has been working religiously on their project.

We’ve curated this list including what we believe to be the most important news to our readers and you play a very important role in making sure to keep this list helpful and relevant. We try our best to include only the most important stories, but naturally some days are void of major developments.

By commenting on this article or another weekly list, you can provide us some insight into what is really important for you, which will in turn improve the relevancy of these articles.