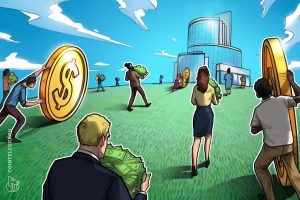 Decentralized exchange dTrade has raised $22.8 million for a market-making fund designed to provide the ecosystem with higher liquidity, potentially setting the stage for wider DeFi adoption on Polkadot once the DEX launches later this year.

The funds will enable dTrade to launch with “deep liquidity” backed by some of crypto’s largest market makers, the company announced Tuesday. Specifically, the capital will be used to facilitate on-chain loans to market makers that provide order book liquidity on dTrade. Community members will also have the opportunity to participate in the on-chain program once dTrade launches, which is expected soon after Polkadot concludes its parachain auctions later this year.

The capital raise had participation from some of blockchain’s biggest companies, including Alameda Research, CMS, Hypersphere, Polychain and DeFiance.

Market makers facilitate smooth open and exit positions for traders who are buying and selling assets on the open market. Market makers essentially place buy and sell orders for tradeable assets to provide liquidity and ensure that transactions are executed at close to fair prices as possible.

As Cointelegraph reported, dTrade concluded a $6.4 million seed round in May of this year to bolster DeFi capabilities on the Polkadot network. The capital raised over the last two rounds coincided with a sharp increase in derivatives trading, which, according to some estimates, accounts for the majority of cryptocurrency trades.

Crypto’s volatile price swings this year have been largely linked to derivatives. During Bitcoin’s (BTC) flash crash in May, crypto liquidations topped $2.4 billion over a 24-hour period, according to ByBit data. Over-leveraged traders were purged from the market during the extreme bearish trend, though recent data suggests open interest in Bitcoin options is on the rise again.

The market for crypto derivatives began to take shape in the second quarter of 2020 but remains in its very early stages. Goldman Sachs became the latest high-profile multinational to enter the market after expanding adding Ether (ETH) options and futures to its trading operations.