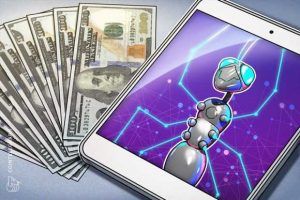 Goldman Sachs has backed a $28 million Series A funding round for blockchain infrastructure firm Blockdaemon.

The funding was led by Greenspring Associates and included participation from crypto lending firm BlockFi, and crypto-asset broker Voyager Digital Ltd, along with a $5 million investment from Goldman Sachs.

Goldman Sachs is an American multinational investment bank with a net worth of $131 billion. The banking giant appears to be paying a significant amount of attention to crypto of late. In May the Goldma led a $15 million investment round in blockchain analytics firm Coin Metrics, and also launched Bitcoin derivatives trading for institutional clients in the same month.

Blockdaemon provides staking and node infrastructure for institutional clients such as Goldman Sachs. According to the firm, it has averaged more than $5 billion in staked assets over the past 12 months and has forecast that figure to reach more than $50 billion by the end of 2021.

The firm offers exposure for institutional clients to networks such as ETH 2.0, Bitcoin, Polkadot, and various protocols such as Dfinity and Near through the Blockdaemon marketplace.

According to a June 8 announcement, Blockdaemon will use the funding to expand node infrastructure services and acquire new staff members and developers. Oli Harris, North America, head of digital assets at Goldman Sachs said:

“We are excited to join them as they continue to provide institutional-grade blockchain technology to all that want to leverage it.”

Despite the investment bank warming up to crypto via investments and expanded services, the firm has taken an ambiguous approach to crypto in the media.

Cointelegraph reported on June 8 that Goldman Sachs published a survey which found that Bitcoin was the least favorite investment class among 25 CIOs from Asian hedge funds.

Earlier this month, the global head of commodities research at Goldman Sachs, Jeff Currie shut down assertions of Bitcoin being “digital-gold” after he described Bitcoin as a “risk-on” asset similar to copper.

However in May, Goldman Sachs analyst Will Nance claimed that investing in Coinbase stock was the best way to gain exposure to the crypto market and avoid its volatility following the recent crypto downturn.