Home » Crypto » How Crypto Twitter could change under Musk’s leadership 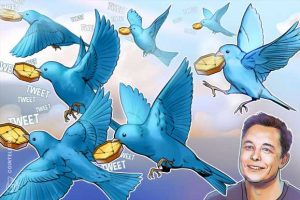 Barring another change of heart and certain conditions to be met, Elon Musk’s acquisition of Twitter looks set to go ahead, prompting the question of whether some or all of the changes he initially hinted for the platform will become a reality.

The platform is a popular communication and news tool for crypto enthusiasts, users and investors, not to mention crypto scammers, with the social media platform seeing roughly 120,000 tweets per day about #Bitcoin alone, according to BitInfoCharts.

Looking back at Musk’s initial commentary when he proposed a buyout of Twitter could shed some light on what changes he envisions for the platform.

This includes a focus on free speech, eliminating spam bots, fake accounts, an edit function and possibly even crypto payments have all been considered and could still be on the agenda if the deal goes through.

One potential area of focus is around Twitter’s alleged spam bots.

During a TED talk in Vancouver in April, Musk said that if his offer to buy Twitter were successful, a “top priority” would be the elimination of spam and scam bots from the platform, noting at the time:

“A top priority I would have is eliminating the spam and scam bots and the bot armies that are on Twitter.”

“They make the product much worse. If I had a Dogecoin for every crypto scam I saw, we’d have 100 billion Dogecoin,” he said.

He has proposed to topple them by “authenticating all humans,” and even made the statement “we will defeat the spam bots or die trying!”

Issues relating to spam bots later became one of the key arguments Musk used to try and walk away from the deal.

Free speech, and return of Trump?

Musk initially addressed his stance on free speech in a tweet back in April, stating at the time, “I hope that even my worst critics remain on Twitter, because that is what free speech means.”

In the months since, he has not publically changed his stance and elaborated on what that could mean for the platform, including a return of former United States President Donald Trump, who was permanently banned from Twitter following the Jan. 6, 2021, U.S. Capitol riot.

He stated in a May 13 tweet that while he thinks Trump should probably not run for president again because he is “divisive,” Musk does think he should be “restored to Twitter.”

Musk has also thought about making Twitter’s algorithm accessible to the public, even creating a poll that ultimately saw over one million votes and had 82% of respondents saying “Yes” to the proposal.

It’s not entirely clear what Musk has in mind but it could mean allowing the software to be open for public inspection and allow users to read the code, use it for their applications and make suggestions for changes to how it works.

Other ideas have either fizzled out or have already been implemented, such as plans to use blockchain technology and charging 0.1 Dogecoin (DOGE) per tweet or retweet, which Musk later said would not be feasible.

Musk also had the idea of adding an edit button and long-form tweets. However, Twitter may have beaten him to the punch with the edit button after the platform revealed that option recently.

The crypto community continues to be divided over whether the move will be a positive move for the platform, but others have taken to poking fun at the whole situation.