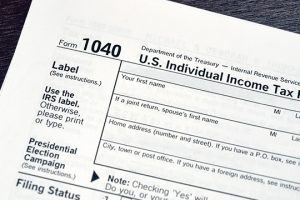 Digital currency traders in the United States will have to file tax returns declaring their ‘gains’ for this year in the not-too-distant future. With the massive bull run that occurred beginning in Q1 2020 until recently, it’s a sure thing that many traders will have hefty tax bills if they’ve realized the gains.

Last year, the Internal Revenue Service (IRS) updated its 1040 form to ask about virtual assets. However, after some confusion which prompted an official IRS answer on the FAQ section of its site, the form has been updated for this year.

What does the new form say?

The previous IRS 1040 form asked, “At any time during 2020, did you receive, sell, or otherwise acquire any financial interest in any virtual currency?”

This led to some confusion: U.S. citizens wondered if buying and holding counted as a digital currency transaction. The IRS clarified that if users had only purchased digital currency, that didn’t count.

This year, it rephrased the question to avoid confusion. Now, it goes like this:

“At any time during 2021, did you receive, sell, exchange, or otherwise dispose of any financial interest in any virtual currency?”

This new phrasing clarifies that people only need to answer yes if they’ve engaged in a digital currency transaction that’s considered a taxable event. It’s understood that the finalized version of the form will come with some guidance on how to answer the question accurately.

What specific activities would require someone to answer ‘yes’ on the form?

The importance of declaring virtual assets and paying tax

There are a lot of myths and falsehoods promoted in the ‘cryptocurrency‘ space. Not declaring digital assets and paying the appropriate taxes on them could have serious consequences, including fines and even imprisonment.

One of the biggest myths is that digital currencies like BTC are anonymous and untraceable. This is not true. Public blockchains like Bitcoin are not encrypted. They present clear text that easily allows tax authorities to track, trace, and follow transactions. Even prominent coin mixing services are being taken down and their operators prosecuted.

The truth is that almost all digital assets are easily traceable. If users ever hope to cash out their gains in the future or spend their digital currencies in any significant amounts, it will lead to questions as to where the cash came from. Governments worldwide are putting an end to anonymous transactions and are demanding that digital asset service providers conduct proper KYC/AML checks. The era of hiding virtual currency gains is well and truly on the way out.

Not only this, but as governments and law enforcement discover how blockchains really work and how they can use them to their advantage to prosecute tax evaders, they’re going to begin doing so. It’s best to simply fill the 1040 form accurately and pay the taxes owed. It’s the smart move for those with the long-run in mind.