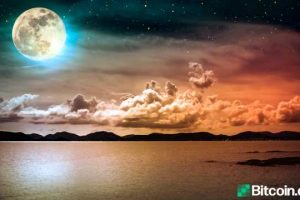 Following an initial seed capital round of $1.4 million, Purestake has raised a $6 million strategic round of financing from a consortium of investors to accelerate development, as the team aims to bring the Moonbeam network live in the second half of the year.

Ethereum may be the blockchain of choice for many decentralized application (dapp) and smart contract developers at present, but that paradigm is quickly shifting as more roads lead towards Polkadot, an up-and-coming cross-chain communication protocol.

With Moonbeam inching closer to launch on a Polkadot parachain, its parent company Purestake has revealed another injection of capital into the organization designed to help the company deliver its smart contract platform later this year.

The $6 million in strategic financing round came from a broad range of investors, echoing Purestake’s commitment to forging strategic partnerships that could help propel the company’s protocol development. Coinfund led the fundraising round, joined by Binance Labs, Coinbase Ventures, Fenbushi Capital, and IOSG Ventures, among other prominent blockchain venture capital firms.

By focusing on gathering renowned industry names, Purestake plans to leverage these relationships to gain the global awareness needed to push Moonbeam adoption to the epicenters of decentralized finance (defi) and NFT activities.

Closing In On Network Liftoff

Purestake’s new round will address several vital activities in the pipeline like building more developer tools and integrations, handling security audits, and expanding its nascent footprint in Asia.

Similar to the multi-stage rollout effort orchestrated by Polkadot over the last year, Purestake intends to follow up on its live testnet parachain with a Kusama-based Moonriver deployment before an eventual parachain mainnet launch mid-year.

Still, the proposed launch of Kusama and Polkadot parachains will be required first, along with third-party code audits of Moonbeam before Purestake can fully realize these ambitions.

Moonbeam is far from the only network enjoying growing awareness and capital inflows, especially when it comes to improving the defi experience. Blockswap, which provides an accessible defi platform designed to break down the complexity of token staking processes, is the latest in a long line of fundraising recipients after receiving $2.5 million private placement from a group of industry funds and investors.

The new round will help Blockswap bring more defi products to market through its expansion into fixed-income offerings. To provide more stability and less volatility to users, Blockswap’s intense focus on accessibility could be another feather in the cap of greater defi adoption as infrastructure catches up to community interest.

Will the launch of Moonbeam promote a massive migration from Ethereum to Polkadot? Let us know what you think in the comments section below.