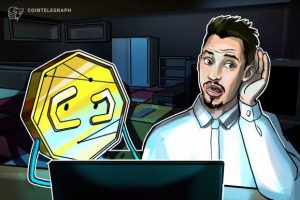 In the hour-long video released June 20 on YouTube, Rusnack laid out his case, claiming that BAYC is “one massive alt-right inside joke” using language, symbols, and memes from the anonymous image board website 4chan.

He alleged the NFT images featured racist caricatures of Black and Asian peoples and drew comparisons between the symbology and language used by Yuga Labs and the BAYC with that used by the Nazis.

For instance, an example widely used by supporters of the claims draws a comparison between the BAYC logo and the Nazi Totenkopf symbol used by the SS Panzer Division in World War II.

At the end of the video, Rusnack makes a call to action, asking his viewers to pressure BAYC NFT owners to “burn” their token in a process where the NFT is sent to an unusable and unrecoverable wallet address.

“I want every celebrity actor, athlete, and influencer to burn their f*cking ape. I want to make such a f*cking shit storm that everyone from Steph Curry to Post Malone to Jimmy Fallon is forced to act.”

The claims of racist symbology within the collection have been a hot topic on social media this year but hit the spotlight when artist Ryder Ripps published a compilation of what he claims is evidence of Nazi imagery and antisemitism in early 2022.

Ripps bought the domain gordongoner.com, the same pseudonymous moniker adopted by Yuga Labs co-founder Wylie Aronow to host a website that details numerous examples of the esoteric symbolism. The video details information acquired by Rusnack and the research conducted by Ripps.

Rusnack says in the video there is a “point at which these similarities are no longer coincidences,” adding:

“If I bring up one instance that highlights deliberate Nazi, fascist, or alt-right messaging, you may think to yourself, ‘I see it, but that’s a reach.’ So I ask you: What is your number? At what point do all of these examples become crystal clear in front of your eyes?”

Without directly citing the controversy, Yuga Labs responded to some of the claims, tweeting in January that apes were used as many in crypto refer to themselves as such. Likely regarding the crypto-slang term “ape in,” used to denote when someone invests heavily into cryptocurrencies or projects with little prior research.

Addressing the BAYC logo, Yuga Labs said the purpose was to make the “club” look “ramshackle and divey” and on why they chose a skull:

“We went with an ape skull to help convey just how bored these apes are – they’re ‘bored to death.’”

A senior research fellow at the Anti-Defamation League’s (ADL) Center on Extremism, Mark Pitcavage, often cited as an extremism expert, said in a February interview with Input he saw no correlation between the logo and the Totenkopf and was quoted saying:

“The Nazi Totenkopf is one very specific graphic design of a skull and crossbones, and the monkey skull resembles it in no way except insofar as all skulls resemble each other to a certain degree.”

Pitcavage did agree, however, that traits and attributes of some NFTs were problematic such as the “hip hop” trait with a gold chain and the “sushi chef headband” being stereotypes of Black culture and a Japanese person, respectively.

Overall though, Pitcavage and another ADL researcher Carla Hill said the research complied by Ripps doesn’t point to a specific group of extremists.

Ripps has faced allegations that his complied research is a publicity tactic to sell his own BAYC derivative NFT collection called “RR/BAYC,” featuring over 6,000 NFTs based on the original collection.

Ripps says the collection is a satire and protest aimed to educate those about the BAYC’s alleged extremist ties. However, these allegations don’t present a counter-argument to the claims presented by Ripps in his research.

Cointelegraph contacted Rusnack, Ripps, and Yuga Labs for comment but did not hear back before publication.