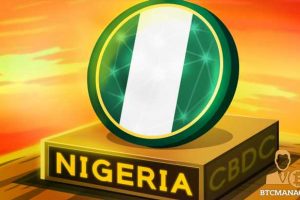 The Central Bank of Nigeria (CBN) is moving forward with its central bank digital currency project (CBDC) project, as the CBN will launch a digital naira pilot program later in October 2021.

According to the Peoples Gazette, the CBN made the announcement while addressing stakeholders at a webinar on Thursday (July 22, 2021). The Nigerian central bank stated that it would not be left out of the ongoing CBDC efforts happening across the globe.

The digital currency project dubbed “GIANT”, will utilize hyperledger fabric blockchain, an enterprise-grade blockchain framework. Meanwhile, the central bank noted that the launch of the CBDC initiative would facilitate cross-border trade and enable macro-management and growth.

Rakiya Mohammed, the CBN’s information technology director revealed that the apex bank has been researching the possibility of issuing a digital currency since 2017. Mohammed also noted that the central bank could conduct a proof of concept for the CBDC before the end of 2021.

While Nigeria is making progress with its digital naira initiative, the CBN has expressed anti-crypto sentiments in the past. Back in February, the apex bank prohibited commercial banks in the country from offering services to cryptocurrency-related businesses. The CBN later in March stated that peer-to-peer trading was permitted

Nigeria first announced plans to issue a CBDC back in June. One of the major reasons for launching a digital currency according to Mohammed at the time was to improve foreign remittance transfers.

Meanwhile, Nigeria’s CBN is among the few central banks in Africa making plans to issue a sovereign digital currency. Others include the Bank of Ghana with the digital cedi and the South African Reserve Bank (SARB) with the digital rand.

Outside of Africa, other central banks globally continue to carry out CBDC researches and experiments. Earlier in July, the Bank of Korea chose Ground X as its technology supplier for the digital won project.

The United Arab Emirates (UAE) is also planning to launch a CBDC. Other countries include Vietnam, South Korea, Jamaica, New Zealand, Japan, and Singapore. Meanwhile, China continues to carry out extensive trials for its upcoming digital yuan, putting it ahead of other countries.