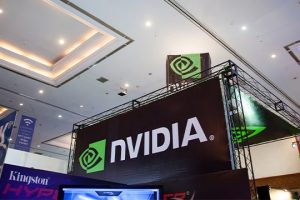 Graphic processing units (GPU) manufacturer Nvidia has reported a stellar first quarter performance, partly boosted by huge demand for its block reward mining processors. Nvidia announced that it’s set to beat the $5.3 billion forecast it gave at the start of the year.

Nvidia has outperformed expectations in all its market platforms, including gaming, data center, professional visualization and automotive, the company said in a press release. Colette Kress, Nvidia’s chief financial officer, remarked, “While our fiscal 2022 first quarter is not yet complete, Q1 total revenue is tracking above the $5.30 billion outlook provided during our fiscal year-end earnings call. We are experiencing broad-based strength, with all our market platforms driving upside to our initial outlook.”

“Overall demand remains very strong and continues to exceed supply while our channel inventories remain quite lean,” she added. “We expect demand to continue to exceed supply for much of this year. We believe we will have sufficient supply to support sequential growth beyond Q1.”

One of the markets that have greatly outperformed forecasts is the company’s block reward miners. Known as “cryptocurrency mining processors (CMPs),” the GPUs hit the market this year to reduce reliance on the gaming GPUs by block reward miners. This reliance had threatened Nvidia’s gaming community, which is its core business, with the miners gobbling up most of the GPUs. The miners’ huge demand led the California-based firm to increase its projections for the quarter threefold.

“The company also raised its first-quarter revenue estimate for its new CMP product for industrial-scale cryptocurrency mining to $150 million, up from $50 million previously expected.”

The demand for these processors has led some miners to extremes, including illegal means to acquire them. As CoinGeek reported recently, Hong Kong authorities recently seized 300 CMPs in an alleged anti-smuggling operation.

While Nvidia has reported a spike in demand for its block reward mining GPUs, it’s been a different reality for Canaan Creative. The ASIC manufacturer announced its earnings report on April 12, revealing it recorded an $11 million loss in Q4 last year. For the full year, the Chinese company lost $33 million.

Canaan, which is one of two Chinese ASIC manufacturers trading on U.S. markets alongside Ebang, remains upbeat that the tides will change. CEO Nangeng Zhang pointed out that demand for its ASIC rigs has picked up as most cryptocurrencies record an extremely bullish market.