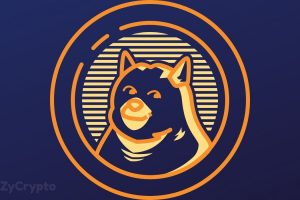 Brad Garlinghouse, the CEO of embattled fintech firm Ripple, recently explained during a CNBC-moderated panel discussion at the Fintech Abu Dhabi event that he is not convinced about Dogecoin.

Garlinghouse Not Convinced About Dogecoin Being Good For The Crypto Space

Brad Garlinghouse observed that Dogecoin, which started as a parody of Bitcoin back in 2013, has gained some significant momentum this year on the back of high-profile endorsements.

Over the past couple of months, Dogecoin has enjoyed a supersonic rally that started after Tesla CEO Elon Musk embraced it as sort of a pet project. The honorary “Dogecoin board chairman” tweets frequently in favor of the meme cryptocurrency and even previously called on the project’s developers to submit proposals for upgrades and for miners to update their software to the latest version.

But despite dogecoin adoption growing faster than ever, Garlinghouse is still not sure the Shiba Inu-themed meme coin is good for the cryptocurrency market.

“I’m actually not convinced, somewhat controversially I guess, that Dogecoin is good for the crypto market,” the Ripple boss said, according to CNBC.

There have been fresh warnings of an inflationary storm recently as the global economy moves into uncharted waters. That said, Garlinghouse is not interested in holding Dogecoin owing to its “inflationary dynamics”. Notably, Doge has an infinite supply, unlike Bitcoin’s hard cap of 21 million.

In fact, Garlinghouse admitted that bitcoin is a viable inflation hedge — despite strongly criticizing the flagship cryptocurrency’s energy consumption in the past. BTC set a new record high of almost $69,000 earlier this month. Though it has fallen below the $60K region recently, it has still usurped the majority of traditional assets like gold.

In other related news, Brad Garlinghouse believes his San Francisco-headquartered company has made “pretty good progress” in its lawsuit with the U.S. Securities and Exchange Commission (SEC) despite an apparent slow judicial progress. The Ripple chief expects the case to end next year.

“Clearly, we’re seeing good questions asked by the judge. The judge realizes this is not just about Ripple, this will have broader implications,” Garlinghouse further pointed out.

In general, Ripple’s expansion plans have remained rather unharmed by the long-standing SEC battle regarding the status of the XRP cryptocurrency. The cross-border payments firm is now looking to onboard 250 employees globally, with over half of those being outside the US where there is a lack of clarity from regulators.