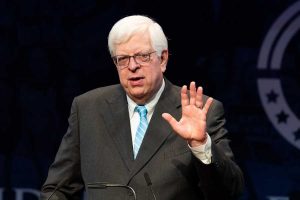 The pandemic has fleshed a wealth of fresh derangement out of conservative figures who already had demonstrated a pretty high capacity for it. Dennis Prager, however, is putting his anti-vaxx colleagues to shame. The 73-year-old radio host, perhaps best known for trying to pass off conservative propaganda videos as reputable under the name “PragerU,” has been projectile vomiting Covid misinformation since the pandemic began.

Prager claimed last year that the disease is “not a killer” while continually drawing and erasing and re-drawing the line for when the U.S. should take real action to combat it. He even called the lockdown “the greatest mistake in the history of humanity.” He’s since touted a number of unproven therapeutics, including the “Zelenko Protocol,” a treatment plan developed by conspiracy theorist doctor and Jan. 6 rally attendee Vladimir Zelenko.

Cuomo Forced Staff to Work on His $5.2 Million Vanity Book Instead of Dealing With Covid: Report

Revealed: The Secret Covid Outbreak That Shot Fear Through the NBA Finals

How True Is 'Respect'? Fact-Checking the Aretha Franklin Biopic

The United States of Weed

Prager is unvaccinated, of course, and during a recent even for Awaken Church felt compelled to play a game of Who’s the Biggest Pariah between the unvaccinated and “the gays … during the AIDS crisis.” It isn’t hard to guess who Prager thinks is more oppressed. “Were people with AIDS banned from travel? Were they banned from restaurants? Were they fired from their jobs? Were they deprived of a way of feeding their family?” he asked, neglecting to mention that anyone who is unvaccinated could have retained these things if they’d elected to take a live-saving shot, whereas people with AIDS were shamed and left to die in huge numbers by people who didn’t care about the disease because they didn’t care about the population it was killing.

Why stop with AIDS, though? Prager is well-versed in the history of humanity, remember?

“The unvaccinated are the most hated group since slavery,” he added.

It’s worth noting here that Prager comparing his oppression to that of the slaves was in service of his point about how the left “has a monopoly on victimhood.” You can’t make this stuff up, folks.

There’s a reason some haven’t been so sympathetic to those who refuse to get vaccinated, and that’s because they’re actively exacerbating a public-health catastrophe that has already resulted in more than three-quarters of a million American deaths. Some of Prager’s conservative radio brethren learned this the hard way. Five such hosts, at least who bashed the vaccine have died from complications stemming from Covid.  Nashville radio host Phil Valentine posted a statement in July saying that he “regrets not being more vehemently ‘Pro-Vaccine’” before dying less than a month later.

Valentine said after testing positive that he wouldn’t get the vaccine because he was now “fully immune.” This is not true, but many on the right have cited already having Covid as a justification for not getting vaccinated. Prager took it to the next level, though, claiming that he was actively trying to get Covid before he tested positive in October.

“I have engaged with strangers, constantly hugging them, taking photos with them knowing that I was making myself very susceptible to getting covid,” the 73-year-old said on his radio show. “Which is — indeed, as bizarre as it sounded — what I wanted, in the hope I would achieve natural immunity and be taken care of by therapeutics.”

Days after Prager claimed he was trying to catch Covid on purpose, the Centers for Disease Control released a study finding that people who had a prior Covid infection were 5.5 times more likely to test positive for the virus than vaccinated individuals who never had Covid. Prager went back on his radio to to take credit for the study, saying he was “responsible” for it, while scoffing at the idea of believing the CDC isn’t trying to deliberately con people into getting vaccinated for some ulterior motive. “To some of you, it is stunning to say the CDC is lying,” he said. “To me, it is like saying the sun shines brightly when there are no clouds.”

Who isn’t lying to you? Prager, of course. He knows what he’s talking about because he’s done “a lot of homework” on Covid — unlike the scientific and medical communities, which want to kill you … or something … for some reason. The point is that Prager, who is profiting off content rilling up anger over the vaccine, is the real victim in all of this.