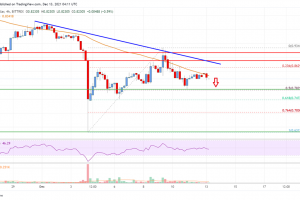 Ripple price is showing bearish signs below $0.92 against the US Dollar, unlike bitcoin. XRP price remains at a risk of more losses below the $0.7820 support.

After a minor upward move, ripple price faced sellers near the $0.9500 level against the US Dollar. The XRP/USD pair started a fresh decline below the $0.9200 support zone.

A close above the $0.88 level could increase the chances of a break above the key $0.90 resistance zone. The next major resistance is near the $0.950 level. Any more gains could lead the price towards the $1.10 level. An intermediate resistance might be near the $1.00 level. Looking at the chart, ripple price is now trading below $0.90 and the 55 simple moving average (4-hours). Overall, the price could continue to move down if there is no recovery wave above $0.8880.

4 hours MACD – The MACD for XRP/USD is now gaining momentum in the bearish zone.

4 hours RSI (Relative Strength Index) – The RSI for XRP/USD is still below the 50 level.