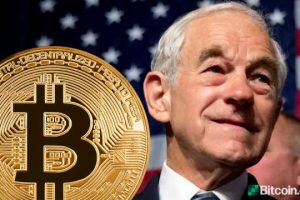 Former U.S. congressman Ron Paul says that he wants to legalize the dollar’s competition, including bitcoin, and let the people decide which money to use, not the government. “Freedom of choice will sort it out,” he said.

Former presidential candidate Ron Paul discussed bitcoin as an alternative asset in an interview with Kitco News’ Michelle Makori Wednesday. Paul is an American author, physician, and retired politician. The former congressman from Texas launched The Ron Paul Liberty Report in 2015 to bring “provocative opinion and analysis to the breaking issues affecting our lives and finances,” its website details.

When asked about his views on bitcoin, Paul said that he knows a lot more about precious metals being money than cryptocurrency. “I was fascinated with it for a long long time. But I’m also fascinated with what’s coming,” he opined.

The former congressman added that “people ought to have as much freedom as possible to have choices.” He then describes a bill he introduced in Congress to “not only audit the Fed but also to get rid of the legal tender laws.” He explained that currently, the government will not allow anything to compete with the dollar on the national level, elaborating:

“My concern is that governments over centuries have been notoriously very eager to have control of the money. Believe me, they will not give up control of money,” he emphasized.

Paul was asked to elaborate on what he meant by legalizing the competition. He replied: “Right now, if you buy and sell gold, you get it taxed, they can do that. If you make a profit in bitcoin, you read stories about people being taxed on it. You can’t tax money, you don’t tax it. If you bought a dollar a year ago and it went down 10%, you can’t take a loss because your dollar lost value.”

Paul will also be speaking at the Bitcoin 2021 conference Friday. Regarding what he plans to say at the conference, he said: “I will argue more the case for the legalization of freedom of choice, and the people should make decisions and not the government.”

He acknowledged that some people are very enthusiastic about bitcoin and think that it is the only money that will exist, replacing the dollar. However, in his opinion:

I think the dollar is going to be around but it’s not gonna be worth much.

Nonetheless, he noted: “the legal tender laws force you to use legal tender, so they won’t even allow you to replace the dollars with cryptocurrency. There will be laws against that. But, I want to totally legalize it.”

He further opined: “I think our problem isn’t the technicality of the gold standards or crypto. Our problems are the dependency on government and less concern about personal liberty. What about property rights and contract rights? This is what we need to be concentrating on.”