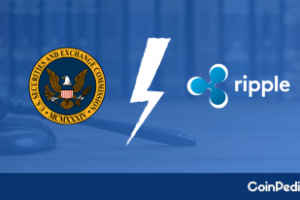 The legal battle between the Securities and Exchange Commission and Ripple has finally reached a conclusion. Since December 2020, Ripple has been battling the lawsuit. Claiming that its XRPs are utility tokens, outside the reach of US regulators. XRP Price, on the other hand, has been a clear outperformer.

Many people believe there are a few things going on behind the scenes. Attorney Jeremy Hogan, who has closely watched the SEC’s action against Ripple, believes a settlement is possible sooner rather than later.

Attorney Jeremy Hogan points out strange things in the SEC vs #Ripple case happening over #XRP while speculating we may be close to a settlement. Watch for yourself and draw your own conclusions: https://t.co/iGf2VewSx1

As the scheduled deposition of William Hinman on July 27 cannot be obtained, Hogan believes the sworn testimony never took place.

“First, I don’t think the deposition of Director Hinman took place last Monday. If it had, where is the transcript to be filed under seal for an in-camera review by the Judge and where is the motion to compel Hinman to answer certain questions?”

Attorney Jeremy Hogan also noted how desperate the SEC was for the deposition to be canceled, as well as how fast the SEC and Ripple agreed on the parameters of the testimony. The two SEC Commissioners’ public remarks last week admitting to a lack of transparency inside the digital asset ecosystem astounded him the most.

The hashtag ‘RelistXRP‘ was trending again on Twitter shortly after the settlement was announced. If exchanges start relisting XRP, the price is predicted to skyrocket.

There is considerable suspicion at this time that Coinbase is set to relist XRP and that it will go online in some manner. In any case, this is just speculative and has yet to be proven.