‘Big Oil’ strikes back with warning on energy transition

Buoyed by high oil prices, the bosses of the biggest explorers this week laid out a vision for the energy transition that hinges on more fossil-fuel investment rather than less.

The World Petroleum Congress in Houston, an industry showcase, saw last-minute cancellations due to the Omicron variant, but it didn’t stop a steady stream of senior executives hammering on the same point: the world will need us for years to come, so let’s invest and produce, or risk more economically damaging price spikes or even social unrest.

“A halt in investment in oil and gas is misguided,” OPEC Secretary-General Mohammad Barkindo said in a recorded presentation to the gathering on Wednesday. Almost $US12 trillion ($16.7 trillion) in spending is needed between now and 2045 to ensure adequate crude and gas supplies, without which the world will see “long-term scars on energy security, affecting not only producers but also consumers.” 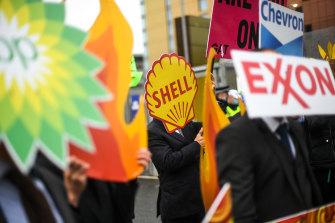 Protesters named fossil fuel giants in their rallies for climate action outside the COP26 summit in Glasgow.Credit:Getty Images

Volatile commodity prices and growing inflation anxiety are recasting the narrative around climate change, just weeks after world leaders hashed out a lacklustre deal at the United Nations Climate Change Conference in Glasgow.

Natural gas shortages in Europe and Asia, surging fuel prices in the US and concerns over power-grid reliability are forcing governments to confront difficult choices around transitioning to low-carbon energy sources.

The contradiction is all too apparent in the US, where President Joe Biden asked OPEC and its allies to increase crude production just months after enacting a wave of anti-oil policies at home including cancelling the Keystone XL pipeline and floating a fracking ban.

The Biden administration’s plea to OPEC “reveals a fundamental truth that should inform any rationale conversation about the future of energy,” said Chevron CEO Mike Wirth. “Oil and gas continue to play a central role in meeting the world’s energy needs, and we play an essential role in delivering them in a lower carbon way.” 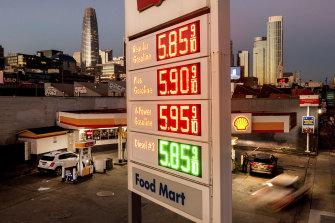 International oil prices are up 45 per cent this year at about $US75 a barrel.Credit:AP

Wirth also called for more “optimism” around the transition away from fossil fuels. “Optimism is the spark of innovation, the catalyst of risk,” he said.

The industry has ample cause for optimism. Even after whipsaw price swings in recent weeks amid Omicron’s spread and supply shortage concerns, international oil prices are up 45 per cent this year at about $US75 a barrel. Benchmark Dutch gas futures have increased five-fold since the end of 2020 to the equivalent of more than $US30 per million British thermal units.

Oil explorers are making the most free cash flow since crude traded for more than $US100 a barrel seven years ago while the US shale industry is reaping record profits.

‘The best intentions poorly executed can do more harm than good.’

Signs posted outside the convention centre in downtown Houston claimed for the city the mantle of “energy transition capital of the world.” But a paramount concern for management teams assembled inside was whether the industry is investing enough in new drilling to meet demand and stabilise prices.

Saudi Aramco’s CEO warned of “chaos” unless governments stopped discouraging fossil-fuel investments. The Riyadh-based International Energy Forum called on companies to raise spending to $US523 billion a year by the end of this decade to forestall an uncontrolled surge in energy prices and economic unrest.

That message is unlikely to go down well with policymakers and environmentalists pushing for stricter limits on emissions worldwide. But it’s also the new reality as the Northern Hemisphere heads into winter facing the spectre of an energy squeeze and record price hikes.

“Narrowly focusing and taking action on one aspect of the challenge could potentially lead to significant unintended consequences,” Woods said. “The best intentions poorly executed can do more harm than good.”

American companies including Exxon and Chevron are much more focused on cleaning up their own emissions, so-called Scope 1 and 2, rather than those emanating from the use of their products. In contrast to most of their European peers, the US drillers see those Scope 3 emissions, which represent the largest part of oil and gas pollution, as the responsibility of consumers.

“This is a massive, massive challenge,” said Mark Little, CEO of Calgary-based Suncor Energy Inc.. “And everybody’s trying to solve that on the supply side and the demonization of the producers, but at what point are we going to have the real conversation?”