Home » Politics » Trump Is Still Clinging to the Delusion That He Won the War on Christmas, Which Isn't Real

Trump Is Still Clinging to the Delusion That He Won the War on Christmas, Which Isn't Real 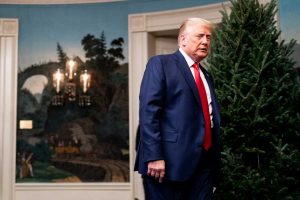 Mike Huckabee hosted a Christmas special on Newsmax this week, and he was lucky enough to score an interview with Donald Trump. It went about as expected, with the former Arkansas governor gushing about all the invaluable work the former president did to reinvigorate America with the spirit of Christmas … or something.

“America had gone through a long period where people quit saying Merry Christmas. It was all Happy Holiday,” a bearded Huckabee told Trump with a twinkle in his eye. “You deliberately changed that and openly said Merry Christmas. We’re going to say it again.”

“That was a big part of what I was doing,” Trump continued over stock footage of softly lit Christmas scenes. “I would say it all the time during that period. We want them to say Merry Christmas. Don’t shop at stores that don’t say Merry Christmas. I’ll tell you, we brought it back very quickly.”

The War on Christmas is not an actual thing, of course. It’s something conservative media invented in an effort to brainwash their audience into believing Democrats are trying to destroy everything they value. Barack Obama regularly wished Americans Merry Christmas while he was in office. Trump around the same time was tweeting Happy Holidays to his supporters. It’s all made up. Americans are hearing Merry Christmas just as much now as they were before Trump took office. Happy Holidays is in the mix, too, just as it’s always been. It’s not an attack on Christmas, only an acknowledgement that other religions celebrate holy days this time of year.

There is no war here. There’s only Trump’s push to politicize Christmas for his personal gain, and a legion of enablers like Huckabee who fawn all over him while he does it.