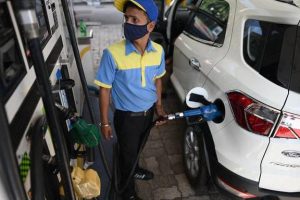 India’s fuel consumption fell in November after scaling a seven-month peak in the preceding month, government data showed, as demand eased in the world’s third-biggest oil consumer after the festival season.

Fuel consumption, a proxy for oil demand, totalled 17.13 million tonnes, down 4% from October and was 11.4% lower than a year ealier, data from the oil ministry’s Petroleum Planning and Analysis Cell showed.

Fuel demand rose in October to a seven-month peak, while gasoline sales surged to an all-time high, as festivals boosted mobility and economic activity.

“However, fuel demand outlook remains upbeat going into 2022 as COVID is not really impacting the country and [there is] good growth outlook on continued reopening momentum.”

Consumption of diesel, which accounts for about 40% of India’s refined fuel sales, also eased 1.7% month-on-month to 6.51 million tonnes and was down 14% compared with November 2019.

Asia’s third-largest economy, last month said it would release 5 million barrels of oil from its strategic reserves in coordination with other buyers including the U.S., Japan and South Korea.