Home » Economy » India’s services exports rise by 6.4% in May

India’s services exports rise by 6.4% in May 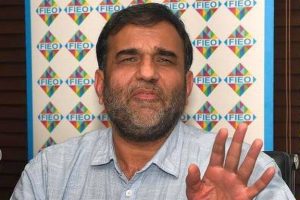 India’s Services exports grew by 6.44% in May 2021 to $17.85 billion, while Services imports grew just 0.3% to $10 billion, as per initial estimates, Commerce Secretary Anup Wadhawan said on Thursday.

“There is a comprehensive recovery in India’s exports with May’s numbers building on the performance in April,” Mr. Wadhawan said, citing the 67% rise in merchandise exports in May, which is also 8% higher than the pre-pandemic month of May 2019.

Services trade has recorded a 15.4% higher surplus in May 2021 over May 2020, so the trade surplus from the sector has gone up, the Commerce Secretary said. Preliminary estimates for May’s merchandise trade were released on Wednesday, while the data for Services trade is an estimation, which may undergo revision with subsequent data releases from the Reserve Bank of India.

While petroleum and gems and jewellery exports had been doing badly earlier, Mr. Wadhawan said that they have contributed significantly to May’s numbers, suggesting that ‘this is a turning point’ for the two.

Dismissing suggestions that imports from China are consistently rising despite India’s AtmaNirbhar Bharat programme, Mr. Wadhawan said that is not an accurate conclusion and the country’s trade with China is ‘more balanced today’.

“Many of the measures taken are medium term so their effects will start showing. The production-linked schemes are materialising into investments on the grounds in a very expedited framework, and the outcomes will be visible in the medium term to long term, (I’d say) more in the early medium term. In sectors like electronics and mobile phones, this will be visible by next year itself,” he said.

“We will give you that analysis, but the fact that the world is facing a recession, I don’t think the price aspect would be very dominant. The dominant effect would be from volume growth. The pre-dominant impact is from volume growth, not price growth in today’s recessionary times… in some areas at the margins, the price would have helped,” he said.

The long-awaited notification of the Remissions of Duties and Taxes on Export Products (RoDTEP) scheme will happen ‘very early’, Mr Wadhawan reiterated again. “There is no doubt on the fact that the RoDTep will be introduced from January 1 this year and it’s part of the government’s policy. It’s a new scheme… needless to say, it has some implementation issues. We have been addressing them and very soon, we will be able to (implement it),” he said.