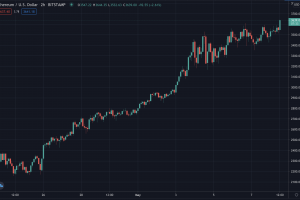 Ethereum has reached a new all time high of $3,640 at the time of writing as the currency suddenly jumped again by about $100.

It was somewhat quietly following bitcoin, which reached $59,500, but then eth gained significantly on the ratio, continuing the eth show.

There doesn’t seem to be a particular reason for this jump except that eth has been quite bullish for the past two weeks now and seems to be light in movements.

So it perhaps just got excited after seeing bitcoin near $60,000, and so it had a run of its own.

One potential news may be that VanEck has filed for an eth ETF, but the price move may be more just sentiment with eth so continuing to keep the show.

For how long remains to be seen as bitcoin has been moving too with new dynamics now seemingly at play.