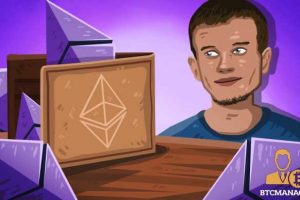 Vitalik Buterin has hinted that he is very bullish on Eth2 development. The Russian-Canadian programmer says a successful launch of the much-anticipated Eth2 will significantly boost Ethereum adoption by businesses globally.

The Ethereum development community has been making significant progress in the journey towards Ethereum 2.0. And cofounder Vitalik Buterin has hinted that despite the fact that Eth2 development has taken much longer than expected, he firmly believes that the team will soon achieve its mission to transform the network into an ecosystem without limits.

During the ongoing Hyperledger Global Summit 2021, the 27-year-old Ethereum co-founder, who recently became one of crypto’s youngest billionaires after his ether (ETH) stash mooned significantly this bull season, reiterated that:

“Our vision in Ethereum has always been to be this platform that’s open to all these different applications where the limit is just your creativity. But if in practice, the economics make it only possible to do just a few things, then in some ways that’s a big limitation on how much of our mission we could actually accomplish.”

While bitcoin (BTC) is steadily gaining ground globally as a legal tender and hedge against hyperinflation, Ethereum has become the number one network for decentralized finance (DeFi) and smart contracts.

Ethereum’s huge success over the years has come with its own challenges, including reduced scalability and exorbitant gas fees, though the latter has decreased significantly in the past few days due to the current crypto markets bloodbath.

During a fireside chat with Brian Behlendorf, the executive director of Hyperledger, Buterin noted that layer-2 scaling solutions such as rollups and sharding hold huge promise.

“So [sharding will boost scalability] x100, rollups times a hundred, the two multiplied times ten thousand. And the hope is that you can simultaneously make the Ethereum network able to handle more users and reduce transaction fees,” he said.

What’s more, Buterin buttressed the need for public blockchains to be more interoperable.

“We should have an ecosystem where businesses and everyone can just all live together and the ecosystems can kind of plug into each other and benefit each other much more. But the challenge is that if you want anyone to be building on the public chain then, then also privacy issues have to be solved,” said Buterin.

In related news, layer-2 solution, Arbitrum officially went live on May 28, and a vast array of Ethereum-based protocols are now tapping the former to circumvent the latter’s shortcomings.

At press time, the price of ether (ETH) is hovering around $2,558, with a market capitalization of $295.92 billion, according to CoinMarketCap.