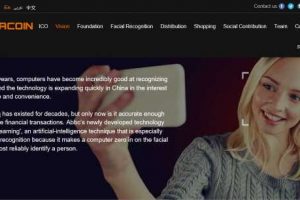 The public ICO stage two includes 11 rounds with 10 days per round.

Their goal to sell 50 million coins in the 1st round was complete after 5 days, which was 5 days earlier than the planned date. Alibabacoin Foundation’s future stages results have aroused public’s curiosity.

Alibabacoin Foundation’s token outstanding performance is driven by its differentiation from other cryptocoins.

Since the facial recognition data is encrypted through blockchain replacing the private key, users will be able to store their money more safely in the electronic wallet. Alibabacoin Foundation development team’s facial recognition technology is secure from personal information leakage and it allows to distinguish the owner immediately using the collected information.

Also, Alibabacoin Foundation is planning to create their own cryptocurrency exchange platform as well as to launch an online shopping website where people can use not only Alibabacoin but other cryptocoins as well.

Along with these innovative plans, Alibabacoin Foundation places emphasis on charitable activities. After the establishment of the foundation in Dubai, United Arab Emirates, they are participated and organized several charity events. They are trying to help the less privileged children of our society.

The CEO of Alibabacoin Foundation, Jason Daniel Paul Philip said “I am not going to be satisfied with what I have achieved so far. The attracted funds from ICO is just a first step towards our higher goals. We will support the developers and establish more professional management. Also, our ultimate aim is to settle down as a new cryptocurrency method in this industry as well as to continuously help and support the less privileged children around the world. Your participation in our ICO is not only about investing in a cryptocoin’s possible growth, it means you are helping the new innovation in the future!”