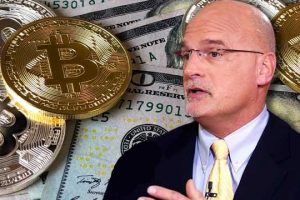 Bloomberg Intelligence senior commodity strategist Mike McGlone believes bitcoin is “more likely” headed for $40K instead of $20K after discussing the possibility of capitulation in a recent tweet. McGlone’s opinion follows a number of predictions that say bitcoin could drop to the $20K zone if there’s more pullback in the cards.

Bitcoin markets have improved on Wednesday, after the announcement stemming from El Salvador which recognized bitcoin (BTC) as legal tender in the country. Even though the news has been positive, some people are still not sure if the “bottom is in.”

There have been predictions of BTC dropping below the $30K region and even down to the $20K zone. Stephen Kelso, head of markets at ITI Capital explained in a note to Bitcoin.com News that there have been reports that suggest BTC could drop to this low point.

“Speculative reports suggest that bitcoin could soon drop to $20,000, referencing the looming bearing cross of the 50 and 200 daily moving averages,” Kelso explained. “However, there are still some positive signs for the price of digital assets to build again, for example the encouraging price action overnight, stabilising funding spreads for futures and a decline in the implied volatilities of options,” the ITI Capital executive added. Kelso further detailed:

More significantly, there has been continued accrual of bitcoin by bigger institutional wallets and Michael Saylor’s Microstrategy has increased the size of its current junk bond offering to $500m to buy more BTC at these levels. These will have more impact on macro hedge funds who will look to take advantage of the pullback opportunity.

Mike McGlone, the senior commodity strategist at Bloomberg Intelligence, explained his view of the situation on Twitter.

“Bitcoin Capitulation? $40,000 Appears More Likely Than $20,000 — The June 8 Bitcoin plunge and revisit of lower-end-range support around $30,000 had many of the earmarks of extreme bearish sentiment typical of more enduring bull-market bottoms,” McGlone tweeted.

Although, not everyone agreed with McGlone’s opinion and one individual said: “One problem with this. When we capitulated in 2014, 2018, and 2020 we found a bottom on the 200 Weekly MA. We are nowhere near it. Real capitulation is usually 80%+ from the high. You’ve been overly bullish through this whole collapse.”

Nevertheless, some responded to the skeptical response to McGlone and stressed:

The CTO of Bitfinex, Paolo Ardoino told Bitcoin.com News that the current pause is no surprise to him.

“This current market pause is not unexpected,” Ardoino detailed. “Everyone needs time to assess and digest what the community has built. We’re waiting for a new momentum to gather as we continue to build upon the foundations created by some of the greatest minds in fintech. I’m still extremely bullish in the long term about bitcoin and the long-term fundamentals and use cases of the technology.”

McGlone: ‘Bitcoin Has Transitioned to a Global Digital-Reserve Asset’

In a couple of tweets prior to McGlone’s assessment of BTC markets on Wednesday, McGlone also said that the Bitcoin 2021 conference in Miami saw “Woodstock-like” bitcoin adoption.

“The June 3-5 Bitcoin 2021 conference further validated our view that Bitcoin has transitioned to a global digital-reserve asset and away from being a speculative crypto,” McGlone remarked on Twitter.

The Bloomberg senior commodity strategist has also tweeted about gold’s price rise in recent times and noted that gold’s previous correction looks complete. “Gold Above $2,000, Silver $30 – May Not Wait for June Unemployment – Weaker-than-consensus April and May U.S. unemployment reports support our key takeaway that gold and silver are ripe to resume their bull markets. Headwinds from rising bond yields & Bitcoin have been alleviated,” the strategist added.