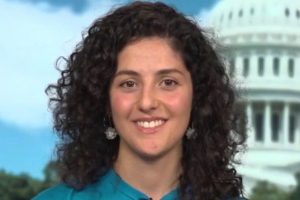 Virginia teacher Lilit Vanetsyan said her colleagues are afraid to speak out against critical race theory for fear of losing their jobs.

The governor of Iowa signed a bill into law banning critical race theory in the state, declaring the Hawkeye State will not teach “discriminatory indoctrination.”

Critical race theory teaches students to look at American society and history through a racial lens and views race itself as a relatively recent social construct that is weaponized by dominant groups to oppress others.

Reynolds announced the signing in a press release sent on Tuesday, where she said critical race theory was not about education, but rather “labels and stereotypes.”

“Critical Race Theory is about labels and stereotypes, not education. It teaches kids that we should judge others based on race, gender or sexual identity, rather than the content of someone’s character,” Reynolds said.

“I am proud to have worked with the legislature to promote learning, not discriminatory indoctrination,” she added.

Specifically, the bill prohibits public colleges in Iowa and governmental agencies from teaching 10 “divisive concepts” in diversity training, including “the idea that one race or sex is inherently superior to another race or sex, that the United States of America and the state of Iowa are fundamentally or systemically racist or sexist.”

Democratic opponents to the bill criticized the measure as trying to shut down conversations on race.

“We can’t have it both ways,” Democratic state Rep. Ako Abdul-Samad said. “We can’t say on one hand ‘we want freedom of speech,’ on another hand say ‘we want to hear both sides’ and then stifle those sides.”

Iowa is the latest state to ban critical race theory from being taught as the subject continues to be the fiery subject of debate nationwide.

Oklahoma Gov. Kevin Stitt signed a bill banning critical race theory and gender-based theory from being taught in public schools and universities, specifically teaching that “one race or sex is inherently superior to another,” and that “an individual, by virtue of his or her race or sex, is inherently racist, sexist or oppressive.”