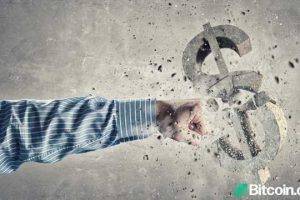 The U.S. dollar’s dominant position as the reserve currency of choice may be in peril, as its share of global currencies held in reserves continues to decline. International Monetary Fund (IMF) data shows, the dollar’s share of reserves dropped from 66% in Q3 of 2014 to just above 60% in Q3 of 2020. This means the dollar’s share has been dropping at a rate of about 1 percentage point per year. Meanwhile, as one report suggests, this latest figure represents the dominant currency’s lowest share in almost 8 years. Furthermore, the report also explains that “the decline in the dollar’s share (actually) began 20 years ago when the Euro assumed the place of the predecessor currencies that used to be in the basket of foreign exchange reserves.” According to the data, the year 1991 is the worst one for the dollar. In that year, the dollar’s reported share of reserves dropped to 46%.

In the meantime, the Euro, which was “the last effort by a single currency to dethrone the dollar” as the number one reserve currency, has had its share stuck between 19.5% and 20.6% over the past six years. Similarly, China’s yuan renminbi (RMB) currency, which became an official reserve currency in October 2016, appears not to be making much headway. After the RMB’s inclusion in the IMF’s “basket of currencies that back the Special Drawing Rights (SDRs)” the Asian country’s currency has only garnered a mere 2.13% share of reserves. China is the world’s second-largest economy. On the other hand, only the Japanese Yen appears to have gained after the proportion of the Asian country’ currency held in reserves rose from 3.5% in 2015 to 6% by the end of Q3 of 2020. This feat made “the Yen the third-largest reserve currency.”

In the meantime, the same report explains that while the dollar’s status as the top global reserve currency continues to deteriorate, it would nonetheless “take a decade for the dollar’s share to drop to 50%, with other currencies picking up the slack.” In any case, this deterioration will only to start having an effect on the U.S. when the dollar’s share “drops (to) well below 50%.”