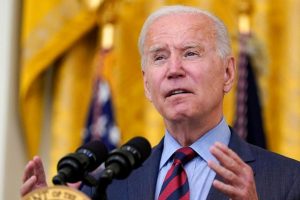 Under heavy pressure from progressive Democrats to extend the eviction moratorium as millions of Americans faced being forced out of their homes, President Joe Biden on Tuesday said his administration would announce a new “safety valve” action.

Shortly afterward, the Centers for Disease Control and Prevention issued an order barring evictions for 60 days in counties with “substantial and high levels” of community transmission.

CDC Director Dr. Rochelle Walensky said the agency had determined the evictions of tenants for failure to make rent or housing payments could be detrimental to public health control measures to slow the spread and that the eviction moratorium in the designated areas would apply until Oct. 3.

“This moratorium is the right thing to do to keep people in their homes and out of congregate settings where COVID-19 spreads,” Walensky said in a statement. “It is imperative that public health authorities act quickly to mitigate such an increase of evictions, which could increase the likelihood of new spikes in SARS-CoV-2 transmission. Such mass evictions and the attendant public health consequences would be very difficult to reverse.”

Earlier, Biden told reporters that what he hoped would be a “new moratorium” from the CDC would cover about 90% of renters, although he quickly added, “I didn’t tell them what they had to do.”

At the same time, Biden said that he isn’t sure if the new moratorium would pass constitutional muster and expects legal challenges, but he said that some scholars he consulted think “it’s worth the effort.”

Biden said “at a minimum” that by the time this works its way through the courts, some of the funds will be able to reach renters who are struggling.

“Today is a day of extraordinary relief. Thanks to the leadership of President Biden, the imminent fear of eviction and being put out on the street has been lifted for countless families across America. Help is Here!” her statement read.

The move comes after Pelosi told the Democratic caucus on a call Tuesday morning that the chamber is not returning to Washington to deal with the lapsed eviction moratorium legislatively and as lawmakers have amped up pressure on the Biden administration to expedite distributing congressionally allocated funds to help with rental assistance amid the public health emergency.

Treasury Secretary Janet Yellen joined the Democratic caucus call Tuesday morning to talk about the distribution of nearly $46.5 billion in congressionally approved rental assistance through states and local governments, of which only $3 billion has been distributed. Yellen fielded questions from the caucus about the delays as Democrats continued to push for getting the funds out more quickly.

It is not entirely clear what more the Treasury Department can do to accelerate distributing the money, but it is clear progressive Democrats are livid that action wasn’t taken sooner — with Rep. Cori Bush, D-Mo., leading the charge and continuing to rally on the Capitol steps Tuesday for a fifth day after spending four nights there.

Bush has been camping out on the Capitol steps

Before Biden spoke, Bush spoke to reporters on the Capitol steps Tuesday afternoon, again calling on Congress and the White House to extend the eviction moratorium.

“We want the White House to end this eviction moratorium,” Bush told reporters.

When word of a new plan surfaced, she tweeted, “On Friday night, I came to the Capitol with my chair. I refused to accept that Congress could leave for vacation while 11 million people faced eviction. For 5 days, we’ve been out here, demanding that our government acts to save lives. Today, our movement moved mountains.”

Bush later said she was ending her protest now that the CDC has acted.

“I plan to go home,” Bush said with a laugh, after someone asked her if she will continue her protest on the Capitol steps.

“Activists are in Congress!” Bush said to applause.

Bush said she will be more useful back in her home district so that she can directly work with her constituents to figure out their rental assistance and avoid eviction.

As other members spoke about Bush’s efforts over the last several days, Bush broke down in tears and Rep. Alexandria Ocasio-Cortez, D-N.Y. quickly walked over and embraced her.

At the same time, neither the Senate’s Democratic leader nor the Republican leader suggested that the upper chamber will or should take any immediate action to address the problem after the House failed to extend the moratorium before adjourning for its recess.

“It looks like the money is there,” McConnell said, referring to state governments. “It doesn’t seem to meet or require any additional legislative action they need to get the money out there that has already been made available so it can solve the problem.”

Schumer said the Senate is focused on urging the administration and states and localities to extend moratoriums and urging states to disburse rent relief funds.

The Biden administration had announced Monday a series of new measures to prevent evictions — but they fell short of the full extension Democrats pushed for, with White House officials continuing to argue they’re constrained from doing more by a Supreme Court ruling that said Congress must act to extend a moratorium.

Pelosi and House Democrats were caught flat-footed and left frustrated at the lack of involvement from the White House on the issue just days before the moratorium expired.

Bush said her experience with homelessness gives her an incredibly unique insight into this devastating situation — when families are booted from their homes and potentially forced to live on the streets.

She was joined by other Democratic lawmakers, including Texas Reps. Sheila Jackson Lee and Al Green, who said even though Congress is not in town, they will continue to work on drafting legislation.

Bush said that Pelosi has been “supportive” and “communicative” with her as she continued to protest on the Capitol steps.

She also told reporters about her conversation with Vice President Kamala Harris on Monday.

“I wanted her to look me in my eyes and I wanted to look in hers, but I wanted her to see down to my soul what pain looks like,” Bush said. “That is not far from me at all, the days that I’ve been out in the car on the street moving the vehicle around the city of St. Louis hoping that the police didn’t come because we were sitting in the car.”

“I remember those moments with my babies crying in the car. And I remember what that was like and not having a place to go,” Bush said.