Home » An ex-cop, anti-vaxxers, and Mike Huckabee: The most prominent people driving the recall of California Democratic Gov. Gavin Newsom

An ex-cop, anti-vaxxers, and Mike Huckabee: The most prominent people driving the recall of California Democratic Gov. Gavin Newsom

The recall effort against Gavin Newsom is the most serious once since Democrat Gray Davis was ousted, in 2003, making way for Arnold Schwarzenneger. 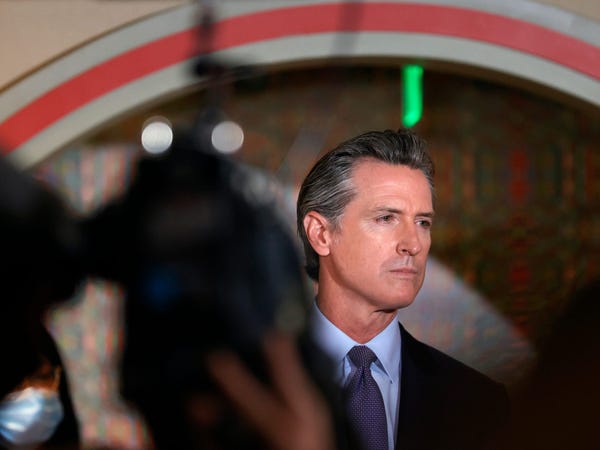 California Governor Gavin Newsom, a Democrat, faces a boisterous recall effort from disgruntled citizens. While the effort existed prior to the coronavirus crisis, it picked up steam following outrage over coronavirus, lockdowns, and Newsom’s own ill-advised trip to a swanky Napa Valley restaurant while his constituents endured pandemic restrictions.

It’s common for California governors to face recall threats, but it’s rare for one to actually lose his or her job in a recall election. Only Democrat Gray Davis was ousted, in 2003, and was ultimately replaced by the Terminator himself, Arnold Schwarzenneger.

Making Newsom’s recall more interesting is the collection of activists behind it. News reports, public records, and social media reveal a sprawling coalition of Republicans, MAGAites, Silicon Valley billionaires, militia members, and anti-vaxxers among the organizers, major donors, and other volunteers behind the effort.

Here are some of the most important people pushing to recall and ultimately oust Newsom. 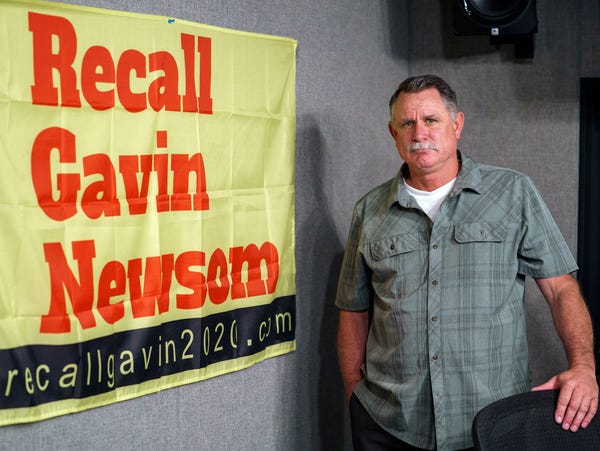 This retired sheriff’s deputy for Yolo County is the main man behind the Newsom recall effort. Heatlie, upset over Newsom’s immigration policies, actually started a recall petition way back in 2019. But the economic fallout and fury over stay-at-home orders unleashed on the state by the coronavirus brought the effort new attention in 2020.

The political novice who famously runs his campaign out of his Airstream home is now the most prominent face of the movement, which, if it gets on the ballot, would be only the second recall election in the state’s history. Organizers say that they have gathered 2.1 million signatures, more than the 1.5 million needed to trigger an election. Election officials are still verifying the signatures.

Heatlie told the Sacramento Bee that the since-deleted post was intended as “hyperbole” and “I am and have always been adamantly against forced microchipping, forced tattoos or forced vaccines.”

Economy is one of the most visible activists behind the recall and serves as a spokesperson for the effort. Economy, who occasionally sports an eye patch as a result of blindness in his right eye, says on his Twitter account that “I am being called ‘America’s Superhero Pirate.'” (His LinkedIn profile lists him as fluent in two languages: English and Pirate.)

Economy’s eccentric persona belies a long career in and out of California politics and media, not only switching between the two fields but within parties as well.

He spent several years working on behalf of Democratic candidates before joining the bid to oust a Democratic governor, Mother Jones reported. In addition to his work for the recall, he also hosts a conservative radio show, The Randy Economy Show, that serves as a megaphone for the recall movement. 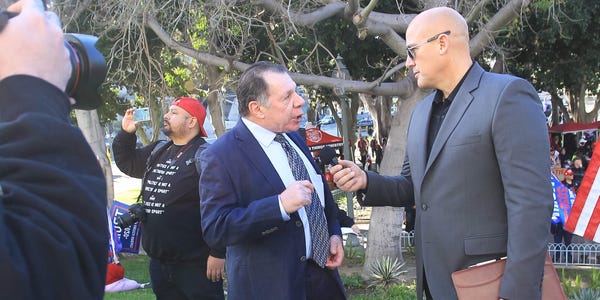 Netter, a marketing expert who describes himself as a “visionary sales leader and rainmaker” on LinkedIn, is a co-founder of the recall effort along with Heatlie. He works in real estate, and was previously involved in an earlier, failed recall effort against Newsom, Politico reported.

McCrea bills herself as the chief financial officer for the recall and helped gather signatures in Butte County, in Northern California, according to a local ABC affiliate. She’s a budget analyst at California State University, Chico’s agriculture school.

A Los Angeles Times investigation into the recall leaders revealed that McCrea posted on social media calling Biden a “pervert” and disputing the results of the 2020 presidential election after former President Donald Trump falsely sowed doubt among his base about the legitimacy of the results.

“PEVERT (sic) Quid Pro Joe Corrupt Beijing Biden will NEVER be the President of Patriots…NEVER,” McCrea posted, according to the LA Times. 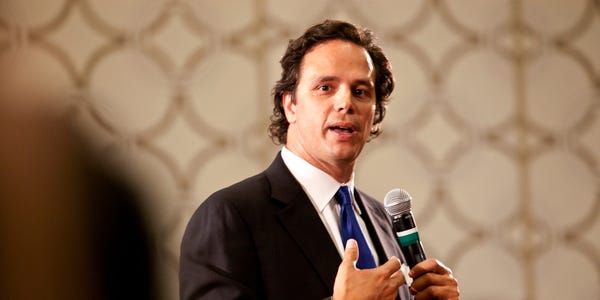 Rescue California is the other big group pushing for Newsom’s ouster, and it’s chief, Del Berccaro, works closely with Heatlie and the Recall Gavin Newsom organizers. Rescue California has poured $955,093 into the recall effort so far, state records show.

Rescue California was created for the 2003 Davis recall, but has been revived to take on Newsom. 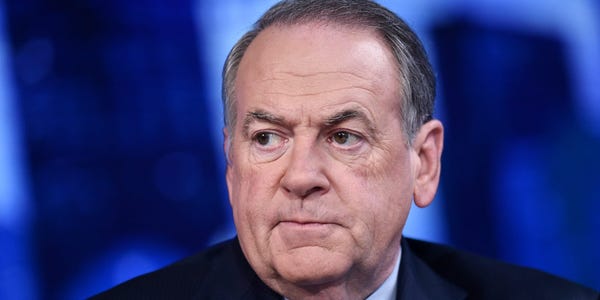 Huckabee, a conservative media personality who was Arkansas’ Republican governor from 1996 to 2007 and unsuccessfully ran for president twice, is one of the top financial backers of the recall effort, according to state records.

His political action committee, HUCK PAC, has put a total of $175,000 into two recall committees.

He also encouraged his followers to donate to the recall in December, when he tweeted, “California’s liberal elite send their kids to private school & dine out while lecturing YOU about danger of leaving your home. Governor Newsom’s shutdown holds families hostage. It’s time to go @GavinNewsom, I’m backing the recall.”

Late last year, the recall effort got an enormous infusion of cash — half a million dollars — from a mysterious consulting firm listed on state records only as Prov 3:9, LLC. Reporters later identified the man behind the money as John Kruger, an Orange County resident and prolific Republican donor. He is also on the board of the California Policy Center, a conservative think tank.

Kruger’s group is the biggest contributor to the recall effort, with funds totalling $1 million so far. The first round of $500,000 was met with a challenge by former Federal Election Commission chair Ann Ravel on behalf of Newsom, who alleged Prov 3:9, LLC was a shell company.

“Both Mr. Kruger and I believe that the Governor’s Executive actions prohibiting religious assembly and worship violated the constitutional rights of Californians to congregate and worship,” Liu said. 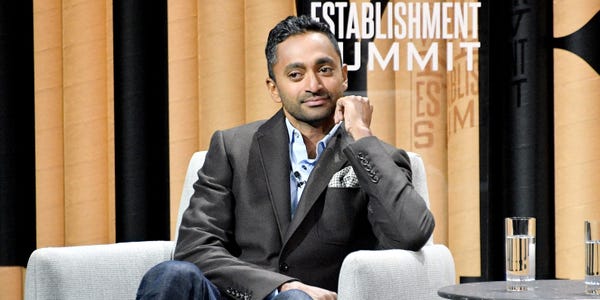 The Silicon Valley billionaire is another major contributor to the recall effort. He has donated a total of $200,000 to two committees backing the recall, according to state records.

Palihapitiya is the CEO of Social Capital, a venture capital firm, and owns a stake in the Golden State Warriors basketball team. But he may have his eye on a bigger job: Newsom’s.

In January, he backed the recall effort and floated the possibility that he would run for governor by tweeting a link to what sure looked like a campaign website. He walked that back a few weeks later though, saying on a podcast he wasn’t ready for a run.

The website is still up, though, and features a homepage with a few policy positions and a brief declaration from Palihapitiya.

“California is a mess — it’s too expensive,” he writes. “Our teachers are underpaid, and our schools aren’t good enough.”

Bate, who has helped gather thousands of signatures for the recall in El Dorado County, is also supportive of the anti-government militia group Three Percenters, per the LA Times. Members of the group, which has existed since about 2008, have played a role in several right-wing protests in recent years, including the 2017 white supremacist rally in Charlottesville and more recently, the January 6 attack on the U.S. Capitol.

Denise Aguilar and Tara Thorton of the Freedom Angels 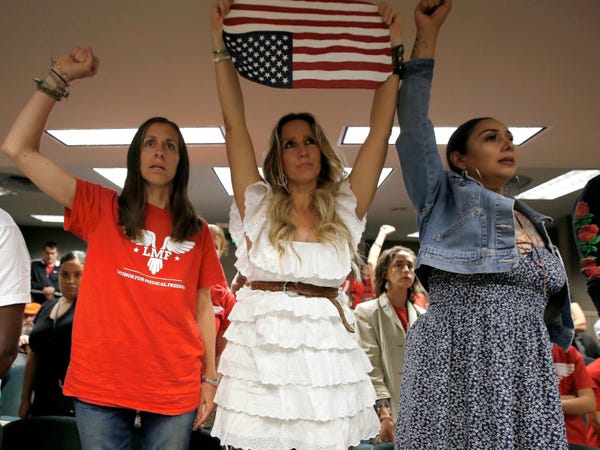 Thorton and Aguilar are two other controversial backers of the recall movement, founding members of Freedom Angels, a California-based anti-vaccination group. The group participated in anti-lockdown protests in 2020.

The LA Times reported that Thorton and Aguilar had helped organize recall rallies at the state capital in Sacramento, which also drew anti-vaxxers and members of the Proud Boys militia movement. 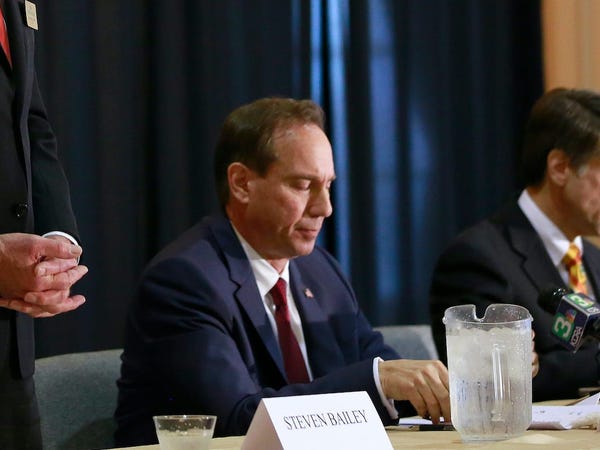 Early is a lawyer for the recall effort, but this isn’t his first brush with politics. Early ran unsuccessfully as the Republican opponent to Democrats Rep. Adam Schiff in 2020, and then-California Attorney General Xavier Becerra, in 2020.

Wahlberg was one of the early organizers of the recall, according to the LA Times, helping gather signatures to make the ballot. She helped organize events and previously worked with Heatlie on a different recall effort.

Seoane is named as the author on most of Recall Gavin Newsom’s press releases.

Abercrombie is a florist turned volunteer for Recall Gavin Newsom. She claims on the recall’s website she lost her employees due to California’s new labor law, AB-5, which required employers to reclassify some independent contractors as employees.

Hurd is a paralegal from Northern California, near Sacramento. She is a volunteer for the recall effort and posts in pro-recall Facebook groups to promote the drive.

Suela helped propel the recall effort in Sacramento County, and worked on a previous failed recall effort with Heatlie, according to the Daily Journal.