Because Fracking Wasn't Already Toxic Enough, the Oil and Gas Industry Decided to Add 'Forever Chemicals' to the Mix 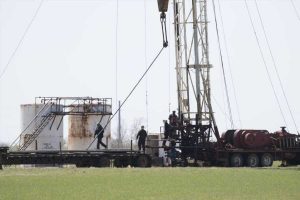 A fresh hazard has been uncovered in the oil and gas industry: For the past decade, the Environmental Protection Agency has knowingly allowed oil companies to use chemicals that could break down into PFAS — a class of highly toxic, long-lasting compounds also known as “forever chemicals,” which have been linked to cancers, birth defects, and other serious health problems, a new report has found.

The report, released by Physicians for Social Responsibility and first reported by The New York Times, is based on internal EPA documents obtained using the Freedom of Information Act. The documents show that the agency approved three new chemicals for use in drilling and fracking in 2011, despite clearly stated concerns about their safety: namely, that as the chemicals broke down, they would become PFAS, which, the agency said, could create a persistent, toxic threat. (The EPA did not immediately respond to a request for comment.)

100 Best Sitcoms of All Time

The EPA didn’t keep public records of where these chemicals were used, but through the FracFocus database, which tracks chemicals used in fracking around the country, the advocacy group determined that at least 1,200 wells across Arkansas, Louisiana, Oklahoma, New Mexico, Texas, and Wyoming used PFAS — or chemicals that, once degraded, turn into PFAS — between 2012 and 2020. But because many states don’t require companies to report the chemicals that they inject, that number could be much higher.

The chain of possible exposure is vast — from workers in the oil fields, to truckers that haul the chemicals to disposal sites, to the communities and waterways that surround them. “The evidence that people could be unknowingly exposed to these extremely toxic chemicals through oil and gas operations is disturbing,” Dusty Horwitt, the author of the report, said in a statement. “Considering the terrible history of pollution associated with PFAS, EPA and state governments need to move quickly to ensure that the public knows where these chemicals have been used and is protected from their impacts.”

Details about the chemicals used in fracking and drilling are notoriously difficult to bring to light. The documents were heavily redacted — concealing trade names of chemicals and even the name of the company that applied for approval —  likely due to a loophole that allows oil companies to conceal information about the chemicals they use as “trade-secrets.” But testing of oil and gas waste has found a wealth of carcinogens, heavy metals, and radioactive elements. One 2016 report from the EPA found more than 1,600 different chemicals involved in fracking alone.

But this is the first time that the use of PFAS in oil and gas drilling has been publicized, and the chemicals add a new layer of hazards to the industry.

There are thousands of PFAS chemicals — all man-made compounds of carbon and fluorine — and they are toxic even in minuscule concentrations; as little as one cup in 8 million gallons of water is enough to make the water toxic.

Of the thousands of PFAS compounds that have been developed, only some have been studied for their health impacts, but so far, they’ve all raised alarms. PFOA — the PFAS chemical that contaminated the drinking water around a DuPont Teflon plant in West Virginia and inspired the 2019 film Dark Waters — is linked to cancers, thyroid disease, high cholesterol, pre-eclampsia, and ulcerative colitis. In an EPA assessment of the two most common PFAS chemicals, studies found connections to birth defects, accelerated puberty, and damage to the liver and immune system. One study even found that infants who are exposed to PFAS have a weakened response to vaccines.

The dilemma, though, is that “PFAS are really useful chemicals,” said Linda Birnbaum, a toxicologist and former director of the National Institute of Environmental Health Sciences, in a press conference yesterday. They’re exceptionally slippery, and good at repelling water and oil — which is why, in the decades after their invention in the 1930s, they were used in everything from stain-resistant carpeting to fire-fighting foam to the plastic lining inside popcorn bags. And while the EPA documents don’t indicate how or where the chemicals were used in the process of oil and gas extraction, a 2008 paper written by a DuPont researcher found that the “exceptional” water-repelling characteristics of chemicals like PFAS showed promise for use in oil and gas extraction.

But for all of their usefulness, the chemical bonds in the man-made PFAS are impossible to break down, so the chemicals accumulate in our environment and in our bodies, earning them the nickname “forever chemicals.” One 2007 study found that more than 98 percent of Americans have them in their bloodstream. Parents are even able to pass PFAS to their children through breastfeeding.

For that reason, the EPA worked with manufacturers to phase out the use of PFAS chemicals, and they haven’t been produced in the U.S. since 2012. But it’s still possible to use existing stores of the chemicals, or to import products that use them, a workaround that the oil and gas industry appeared to use. The report found that oil companies started importing the chemicals for commercial use in November 2011, shortly after they were approved by the EPA, and continued until at least 2018.

In the report, Physicians for Social Responsibility urges the EPA to issue a moratorium on the use of PFAS in the oil and gas industry, track where they’ve been used, and begin health assessments on the communities and wildlife that surround the wells.

They also insist that the government hold the oil and gas industry responsible for removing PFAS from the environment, but that won’t be easy. Because PFAS compounds don’t break down, “once it’s in the environment, there’s no easy way to get rid of it,” said Birnbaum.

The leading cleanup method requires activated charcoal, “similar to what you find in a Brita filter, except the quantities have to be much, much greater,” explained Horwitt, the study’s author. “And then once that carbon fills up with PFAS — and perhaps other contaminants — you’d have to dispose of it somewhere. And landfills can be reluctant to accept this waste.”

Even if a system of removal and disposal was accessible to oil and gas companies, it’s still unlikely that the oil and gas industry will ultimately pay for this damage. They’ve already shirked responsibility for millions of “orphaned” wells across the country — which could cost as much as $300 billion to clean up. Not to mention that fracking and drilling companies have been declaring bankruptcy at an unprecedented pace. By the time the government could get around to holding them responsible, those companies are likely to be gone, says Silverio Caggiano, a hazardous waste expert who contributed to the report. “It’s going to be the taxpayer that gets caught with a bill for cleaning this all up.”