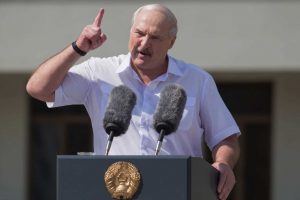 Belarus President Alexander Lukashenko on Wednesday launched a tirade against what he described as "ill-wishers" who were trying to "strangle" his country.

In his first comments since a Ryanair plane carrying Roman Protasevich, a prominent Belarusian opposition activist, was forced to divert to Minsk on Sunday whereupon he was arrested, Lukashenko dismissed criticism from the West.

"As we have forecast, our ill-wishers from the outside and even inside the country have changed their methods of attacking the state. They have crossed many red lines, have crossed the boundaries of common sense and human morals," Lukashenko told Belarusian lawmakers and officials on Wednesday, state news agency BeITA reported.

The Ryanair plane was reportedly diverted on the personal orders of Lukashenko, although Belarus claims it believed there was a bomb threat which turned out to be false.

Lukashenko — who has been dubbed "Europe's last dictator" having ruled for 27 years, increasingly against a backdrop of repression of opposition activists and calls for democratic reforms — added that he acted "entirely lawfully" during the plane incident and claimed information about the bomb threat came from Switzerland, although he didn't elaborate on the source.

The incident prompted widespread outrage and condemnation in the U.S. and Europe, being described as a "hijacking" and an act of "state terrorism."

Belarus said it "recommended" that the plane, a commercial Ryanair flight traveling from Athens to Vilnius in Lithuania, land because of the security threat. However, the incident was widely seen as a ploy to detain Protasevich, who has been living in exile since 2019.

Russia, Belarus' ally and overarching influence, defended the country and called the West's reaction "shocking." On Wednesday, Lukashenko claimed that ill-wishers outside the country "are waging a hybrid war against Belarus" and that the country was a "test ground for a future attack on Russia."

The EU announced Monday that more sanctions would be imposed on Belarus as a result, as global leaders called for the release of Protasevich and his girlfriend, Sofia Sapega, who was also detained.

Separate videos of the couple have since been posted online in which they appear to "confess," almost certainly under duress, to "crimes" Protasevich had been charged with by the Belarusian state. Belarus' opposition and the couple's families fear for the health of the pair and say that Protasevich could have been tortured in custody.