Home » Biden gets higher approval ratings than Congress, according to two national polls

Biden gets higher approval ratings than Congress, according to two national polls 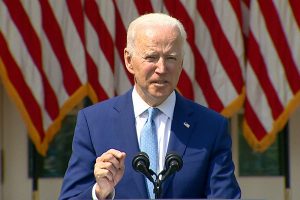 President Joe Biden has higher job approval ratings than Congress as he nears his first 100 days in office, according to two new national polls.

In February, Quinnipiac found 50% of adults approved of Biden’s job performance compared to 51% for Monmouth. The percentage who disapprove remained virtually unchanged in both polls.

Quinnipiac poll respondents reported positively on the president’s handling of the economy, climate change, taxes and the coronavirus pandemic. Biden was rated lower on gun policy and the migrant crisis at the U.S. southern border.

Approval ratings for Congress are lower in comparison. Most adults (56%) told Monmouth pollsters they disapproved of Congress’ job performance, compared to 35% who approved.

Job performances for congressional Republicans in Congress were viewed favorably by 27% of adults while 63% disapproved in the Quinnipiac poll. The margin for Democrats was closer, but more – 49% – still disapproved of their job performances than approved, 43%.

Nearly half of respondents said they feel the country is “headed in the right direction” — an eight-year high in Monmouth’s national polling.

The president’s response to the coronavirus pandemic ranks highest in both polls. Quinnipiac reported 64% of adults approve of Biden’s policies, 28% disapprove and 8% offered no opinion.

“Good will for the president remains high, particularly for his response to the pandemic,” said Patrick Murray, director of the independent Monmouth University Polling Institute.

Around six in 10 adults said they supported Biden’s $1.9 trillion COVID-19 relief package, which passed in March, Monmouth found. The bill received resounding support from Democrats — 96% of whom said they approved, compared to 23% of Republicans and 63% of independents.

More Democrats than Republicans get vaccinated

Vaccine hesitancy remains high, despite confidence in Biden’s efforts to slow the spread of the coronavirus. One in five American adults told Monmouth pollsters they are unwilling to get the vaccine. Over half of respondents to the Quinnipiac poll have received at least one shot, and 68% reported having been vaccinated or plan to be vaccinated.

The disparity in both polls corresponds with political affiliation.

“The number of people who have been skittish about the vaccine has dropped as more Americans line up for the shot, but the hardcore group who want to avoid it at all costs has barely budged,” Murray said. “The recent news about J&J vaccines is probably not going to help that situation. On the other hand, it might not make it all that much worse since much of this reluctance is really ingrained in partisan identity.”

More Democrats (67%) than Republicans or independents (47%) told Monmouth pollsters they were vaccinated. Quinnipiac University polling analyst Tim Malloy said “only time will tell” if the recent pause on Johnson & Johnson vaccine distribution will affect the number of people who plan to get vaccinated.