Capitol Police Officer William Evans, killed in attack, will lie in honor at US Capitol 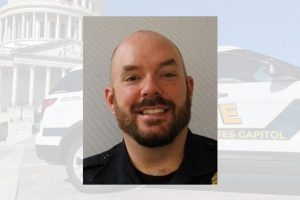 WASHINGTON – U.S. Capitol Police Officer William Evans, who died after Friday’s attack at the U.S. Capitol, will lie in honor next week in the Capitol rotunda, according to congressional leadership.

Evans was an 18-year member of the force and served on the agency’s First Responders Unit.

“The United States Congress joins all Americans in mourning the tragic death of one of our Capitol Police heroes, Officer Billy Evans,” said House Speaker Nancy Pelosi, D-Calif., and Senate Majority Leader Chuck Schumer, D-N.Y. “In giving his life to protect our Capitol and our Country, Officer Evans became a martyr for our democracy. On behalf of the entire Congress, we are profoundly grateful.”

The tradition of using the Capitol rotunda to pay tribute to distinguished Americans began in 1852, but historically that honor has been given to military officers and elected officials who have “lain in state.” More recently, Congress has allowed citizens to “lie in honor.”

Only a few other private citizens have lain in honor, according to a House history of the tradition, including two other Capitol Police officers who died in the line of duty in 1998: Officer Jacob J. Chestnut, Jr., and Detective John M. Gibson.

While rare, Evans will now be the second USCP officer to lie in honor this year. Capitol Police Officer Brian Sicknick, who died after the Jan. 6 attack on the U.S. Capitol, laid in honor in early February.

The press release states a ceremonial arrival will take place April 13 and will be followed by a “Congressional Tribute.”

However, due to the coronavirus pandemic, the ceremony will only be open to invited guests.

A ceremonial departure from the Capitol will occur at 6:30 pm.

On Friday a man drove his car into two officers and a barrier near the Capitol, resulting in Evans’ death and leaving another officer hospitalized. The suspect, 25-year-old Noah Green, died after being shot by police.

“It is now the great and solemn privilege of the House of Representatives and the Senate to convey the appreciation and the sadness of the Congress and Country for the heroic sacrifice of Officer Evans with a lying-in-honor ceremony in the U.S. Capitol,” the joint statement from Pelosi and Schumer reads.

They continued: “It is our hope that this tribute will be a comfort to the family of Officer Evans, particularly his children Logan and Abigail, as will the knowledge that so many Americans mourn with and pray for them at this sad time.

“May this tribute also be a source of comfort and an expression of gratitude to the U.S. Capitol Police Force, which has awed our nation with their courage and resilience during this devastating time,” it concludes.