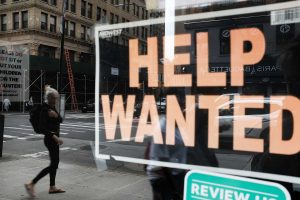 The chief executive of the U.S. Chamber of Commerce said Thursday that the No. 1 problem facing American businesses is their inability to hire enough qualified workers.

"I get to talk to job creators across the country: Small businesses, big businesses. In every industry, in every geography. And they keep bringing up the labor shortage: It is the first thing I hear about," she said. "There is a lot of anxiety out there."

Clark, the first woman to lead the 100-year-old Chamber, noted that there are a record 9.3 million job openings across the country as more firms opened in the aftermath of the coronavirus pandemic.

The Labor Department reported last month that job availability in April surged 32.7% in leisure and hospitality, the sector hurt most by the public health crisis and subsequent lockdowns.

Wall Street will on Friday pore over the department's latest update to its monthly jobs report, which will show how many nonfarm payrolls companies added during June.

Employers are estimated to have added a healthy 706,000 jobs over the month and the jobless rate to have ticked lower to 5.6%, according to economists polled by Dow Jones.

Clark, who leads corporate America's most powerful mouthpiece in Washington, praised the $1.2 trillion physical infrastructure deal brokered between the White House and a bipartisan group of senators.

"We're thrilled about it. This is critical roads, ports, bridges, airports, but it's also rural broadband. It's also getting the lead out of drinking pipes across the country," she said. "This is a good deal. It does it without raising taxes and it has our full support."

Clark said she was optimistic about the bill's odds in Congress despite some opposition from progressive Democrats. House Speaker Nancy Pelosi, D-Calif., has made clear that her chamber will not take up the physical infrastructure bill without a separate piece of legislation to fund climate-change initiatives, worker training facilities and expand worker leave benefits.

President Joe Biden resumes a road show touting the deal this weekend, when he is scheduled to travel to Michigan.

"There's too much good stuff in this bill that every lawmaker's going to have a hard time explaining why they didn't want this good stuff at home."