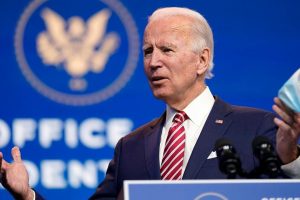 Prominent Democrats have not been shy about making statements and taking action against Wednesday’s riot at the Capitol building, but while the protesters were acting on the unsubstantiated belief that November’s election was tainted by fraud, the narrative has taken a turn to focus on race.

First, there was President-elect Joe Biden’s statement following the riot, in which he made a point to compare the police response to President Trump’s supporters to how they might have handled a similar situation had the protest been conducted by Black Lives Matter.

“No one can tell me that if it had been a group of Black Lives Matter protesting yesterday that they wouldn’t have been treated very, very differently than the mob of thugs that stormed the Capitol,” Biden said, drawing pushback for shifting the conversation to race.

Rep. Cori Bush, D-Mo., went further, claiming that the objections to electoral votes made by members of the House and Senate were about race. Bush introduced a resolution in the House calling for her colleagues who supported the objections to be removed from office for supporting an “insurrection.” The four-page resolution made 11 references to “Black, Brown, and Indigenous people,” claiming that objectors, by “refusing to concede the outcome of the 2020 Presidential election … suggests racial animus and a continuation of efforts by Republican Members of Congress to disenfranchise Black, Brown, and Indigenous voters” due to the large minority populations in the disputed states.

Finally, Trump’s 2016 opponent, former Secretary of State Hillary Clinton, wrote an op-ed for the Washington Post in which she discussed Wednesday’s riot as a white supremacist uprising.

“Wednesday’s attack on the Capitol was the tragically predictable result of white-supremacist grievances fueled by President Trump,” Clinton wrote. “Trump ran for president on a vision of America where whiteness is valued at the expense of everything else,” she later added. Clinton barely even alluded to the election except to accuse Trump and Republican lawmakers of “subverting our democracy,” and to say that the violent protesters had made “plans to march on the Capitol and ‘stop the steal.’”

In the same piece, Clinton advocated for impeaching President Trump for his alleged role in the riot. The article of impeachment that Democrats drafted accuses Trump of inciting an insurrection. It makes reference to talking points about voter fraud he has repeated since the election. It recalls a conversation he had with Georgia Secretary of State Brad Raffensperger in which he mentioned needing to find ballots to invalidate in order to change the state’s election results. It quotes Trump’s Jan/ 6 speech right before the riot in which he said he won the election and that if people did not fight they would not “have a country anymore.”

It does not mention race, because Trump did not either.