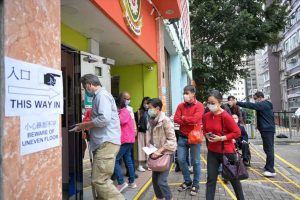 Hong Kong's first legislative election since Beijing overhauled the city's electoral process marks the beginning of a "new politics" in the city, an analyst told CNBC.

"We have to wait to see the final results before we know that for certain, but it does look like the pro-establishment candidates — who are focusing more on livelihood issues, social issues — are going to dominate the legislature," Tim Summers, senior consulting fellow at Chatham House, told CNBC's "Squawk Box Asia" on Monday.

Such issues range from housing and poverty to the environment, said Summers, who added that "we'll still see a fair amount of contestation and debate about many of the livelihood issues that Hong Kong is facing."

Lau Siu-Kai, vice-president of Beijing-based think tank the China Association of Hong Kong and Macao Studies, echoed those sentiments. He said the new legislature will focus on "practical matters" like the city's housing shortage, climbing real-estate prices, and income equality.

Summers said he does not expect much progress on political reform following the elections, but that's "part of the plan" from Beijing's perspective.

"They saw a much greater radicalization of Hong Kong politics over the last five or six years … They wanted to cut that off … after the massive social movements, often violent movements of 2019," Summers said.

"So I think we're seeing a new politics in Hong Kong," he said.

Protests were common in 2019 after China imposed a controversial national security law on the city. Pro-democracy groups, as well as countries including the United States, have criticized that legislation as undermining democracy and individual freedoms. The governments in Hong Kong and Beijing have rejected those claims.

Voter turnout fell to a record low of 30.2% in Sunday's polls, according to Hong Kong's Electoral Affairs Commission, compared with about 58% in the last election in 2016. This year's electoral overhaul meant there would be fewer directly elected representatives and more Beijing-approved officials.

The election had been dubbed a "patriots only" one, with leaders in Beijing and Hong Kong openly saying the new system is designed to ensure that only "patriots" hold office in Hong Kong. They have so far rejected outside criticism of the electoral changes, characterizing the remarks as fruitless interference in domestic affairs.

That's particularly so at a time when many Chinese firms that trade in the United States are under pressure from Beijing to delist from markets stateside and list nearer to home in Hong Kong, Lau told CNBC's "Street Signs Asia."

Chinese ride-hailing giant Didi said earlier this month that it will start delisting from the New York Stock Exchange and make plans to list in Hong Kong instead.