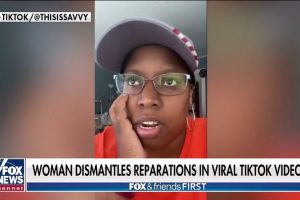 Rep. Ilhan Omar, D-Minn., on Saturday renewed the call for reparations as the country recognized Juneteenth as a federal holiday for the first time.

President Biden made June 19, or Juneteenth, a federal holiday on Friday to celebrate the emancipation of Black slaves after the Civil War,

“Proud #Juneteenth is now a federal holiday,” Omar wrote. “As we reflect on the significance of what this day symbolizes, let’s keep fighting to address the lasting consequences of slavery. Next step: reparations.”

Omar is a member of “the Squad” —  a group of progressive, female lawmakers including Democratic Reps. Alexandria Ocasio-Cortez of New York, Rashida Tlaib of Michigan and Ayanna Pressley of Massachusetts, who previously called for reparations after George Floyd’s May 2020 murder.

While the idea of paying reparations to the descendants of Black slaves in the U.S. or people wronged by the criminal justice system is not new, federal and local lawmakers worked to introduce new legislation focused on reparations in the aftermath of Floyd’s death as the country faced a cultural reckoning.

Evanston, Illinois, in March became the first state to approve a plan to make reparations available to Black residents over past discrimination and the lingering effects of slavery.

The plan, which would be the first of its kind in the U.S., is to distribute $400,000 to eligible Black households. The Associated Press reported that qualifying households in the city of 73,000 would be eligible to receive $25,000 for home repairs or down payments on property.

Critics argue that reparations may be ineffective in creating meaningful change.

Utah Rep. Burgess Owens — a Black, Republican lawmaker and former NFL player — has likened reparations to a “redistribution of wealth, or socialism” and argued that the idea “is not the way to right our country’s wrongs.”