Jobs report to deliver latest evidence of the ‘she-cession’ 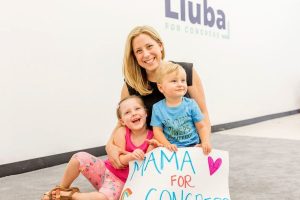 As we anticipate the release of the March jobs report Friday, it’s hard to imagine anything other than confirmation of the continued “she-cession.” Just as last month, we expect this new jobs report to verify what we’ve known for nearly a year now: the pandemic is hitting working women the hardest, with women with children experiencing the largest decline in workforce participation. Over the past year, more than 2.3 million women — particularly Black and brown women — have left the workforce, largely because of the demands of childcare or the loss of service jobs that are more likely to be held by women and the least likely to return any time soon. Women are facing a deepening gender gap in the workforce that experts predict will have consequences on the labor market far beyond the end of the pandemic.

Vice President Kamala Harris recently referred to this crisis as a “national emergency,” and I agree. The dramatic exodus of women from the workforce brings our numbers down to a 33-year low, and the repercussions could impact future generations looking to achieve positions of power in any industry, or those who are simply trying to care for their families.

Moms being pushed out of work

I am devastated by this turn of events, but I am not remotely surprised. Decades of systemic failure, policies that actively hurt women and children, and negligence on issues such as universal childcare, a living wage and paid family leave have brought us to this point. Our political leaders — often wealthy, white, male, and out of touch with the needs of actual families — have been failing us for generations.

Though Biden’s recently-passed $1.9 trillion COVID relief bill included $39 billion to stave off the effects of the pandemic on the childcare industry, it’s not nearly enough. I don’t want our country to go back to the way it was before the COVID-19 crisis. I want our country to be better than it ever was before.

Liuba Grechen Shirley and her children in 2018 at the Liuba for Congress campaign office in Bay Shore, New York. (Photo: Family courtesy)

There’s one solution that we know will help: more mothers in elected office. By the time American women are 44-years-old, 86% are mothers. Yet, just 6% of people in the 117th Congress are mothers with school-aged children. Having parents in public office, especially mothers with young children, will change the conversation and priorities at the decision-making table. Together, moms in office can spearhead a progressive agenda that prioritizes the needs of families and breaks down the systemic barriers that have historically kept women down.

Moms in Congress write more bills over the course of their term than other women do, and their legislation is focused on health care, child care, education, paid family leave and affordable housing for families — solutions that are particularly needed amid the pandemic. Long before the pandemic, Elizabeth Warren and Deb Haaland, both mothers, unveiled the “Universal Child Care and Early Learning Act” — the single most comprehensive and essential legislation ever proposed to address the childcare crisis in America — and they remain leaders in the fight for universal childcare.

Without more moms in office, and especially non-white moms and those with diverse backgrounds, we miss out on the critical voice of women with life experiences who can serve a progressive agenda. In 2017, Jennifer Carroll Foy was pregnant with twins while running for the Virginia House of Delegates, and nearly died after giving birth. Like many Black women, she felt her pain was dismissed by doctors — a well-documented phenomenon that has contributed to a shocking maternal mortality rate among Black women, who are 243% more likely to die in childbirth or from pregnancy-related conditions than white women. Once elected, she enacted essential legislation to address racial health disparities, ensuring that fewer Black women experience the same terror she did.

So how can we get more moms to run for office? One simple tactic is allowing candidates to utilize campaign funds for childcare. When I ran for Congress in 2018, my children were one and three-years-old. I would make calls to donors while Nicholas nursed and Mila covered my head in hair clips. My mother was able to watch my babies every day after 3:30 p.m., which allowed me to head out the door, meet constituents and attend community meetings. For months, I built forts and changed diapers with my phone attached to my ear. This schedule was unsustainable — but so was paying for childcare after giving up my salary to run. I no longer wondered why more mothers with young children weren’t running for Congress.

I petitioned the Federal Election Commission, and became the first woman to receive federal approval to spend campaign funds on childcare. Fifty-one federal candidates have since used their campaign funds to pay for childcare — 73% were moms, and almost half were people of color.

However, the ruling on my request does not apply to candidates running for state and local office. At Vote Mama Foundation, we’re fighting to get all 50 states to approve the use of campaign funds for childcare by 2023 and are working with candidates to petition state and local election commissions and legislators to introduce legislation. 19 states have now approved the use of campaign funds for childcare — 12 through ethics commission rulings and 7 by passing legislation. Legislators in an additional 11 states introduced the legislation in prior sessions, but were not yet successful in passing it. At least 13 states have already introduced legislation in 2021, and we are hopeful that many more states will follow.

Fighting racism: How Black and Asian American women are working together to overcome racism

The impact of such legislation could be staggering, and will knock down a significant barrier to ensuring that our representatives share the voices and priorities of the people they serve.

Though there’s much work to be done to address the motherhood penalty in America across all systems, we can start by electing more moms. We’ve already experienced the consequences of a homogenous political leadership, and we all deserve better.

Liuba Grechen Shirley ran for Congress in 2018 and is the founder and chief executive of Vote Mama, Vote Mama Foundation, and Vote Mama Action Fund.