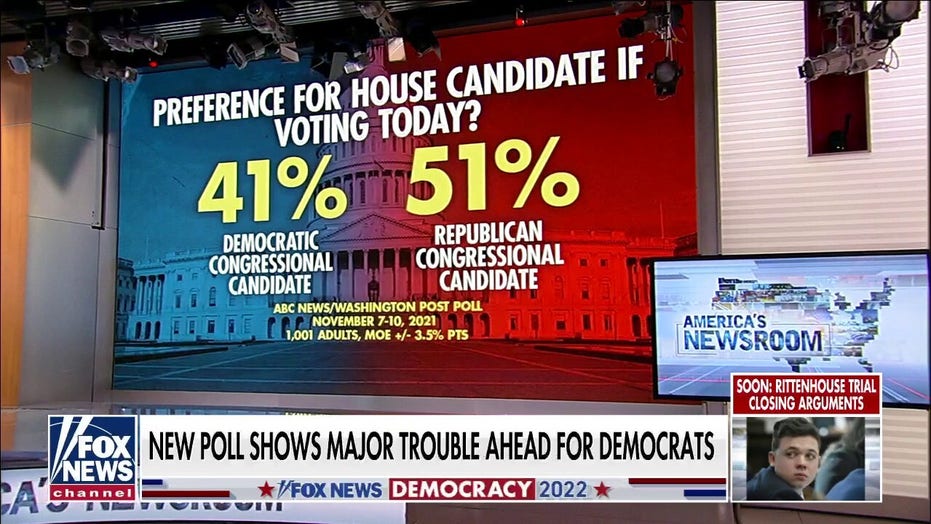 EXCLUSIVE: The National Republican Senatorial Committee (NRSC) is dropping a new ad that hits President Biden for “doz[ing] off” during meetings while his party flounders.

“When Joe Biden dozes off in meetings, is it sweet dreams or nightmares?” the narrator says in the ad, which is punctuated by Vice President Kamala Harris laughing maniacally. 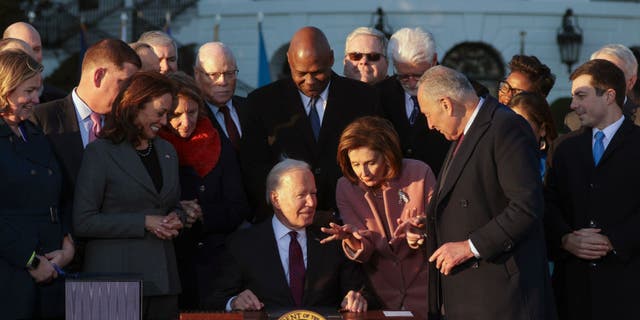 U.S. President Joe Biden talks to Speaker of the House Nancy Pelosi after signing the Infrastructure Investment and Jobs Act as he is surrounded by lawmakers and members of his Cabinet during a ceremony on the South Lawn at the White House on November 15, 2021 in Washington, DC. (Photo by Alex Wong/Getty Images)

The ad cites the Biden administration’s plummeting approval ratings and Republican Governor-elect Glenn Youngkin’s win in Virginia as signs the Democratic Party is heading for trouble in the 2022 midterm elections.

“Joe Biden and Senate Democrats are in for a rude awakening,” the ad states.

The NRSC is releasing the new ad, which was first obtained by Fox News, in a five-figure campaign hitting the administration in New Hampshire, Georgia, Nevada and Arizona — where Biden’s approval ratings are particularly low. According to a new ABC/Washington Post poll, Biden’s overall job approval rating is 33% in those states, compared with 43% elsewhere. 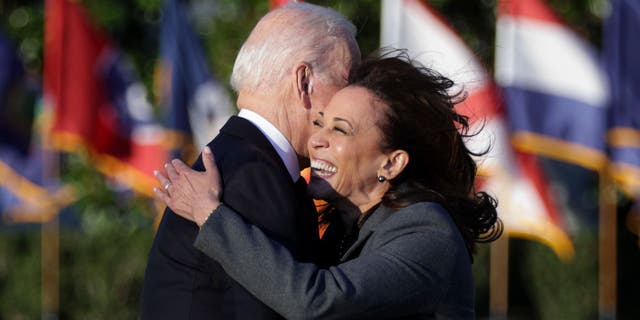 U.S. Vice President Kamala Harris hugs President Joe Biden as he prepares to deliver remarks during the signing ceremony for the Infrastructure Investment and Jobs Act on the South Lawn at the White House on November 15, 2021 in Washington, DC. (Photo by Alex Wong/Getty Images)

Sen. Rick Scott of Florida, who chairs the NRSC, said in a statement to Fox News that the Democrats will pay politically next November for “doubling down on the radical agenda that voters are rejecting.” 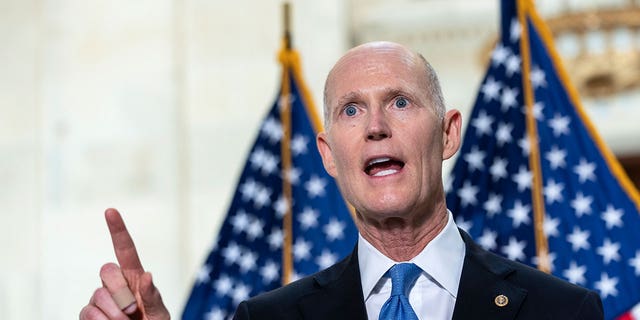 Sen. Rick Scott (R-FL) speaks during a news conference about inflation on Capitol Hill on May 26, 2021 in Washington, DC. The group of Republican senators discussed rising consumer prices and the potential effects of inflation on families and businesses recovering from the pandemic. (Photo by Drew Angerer/Getty Images)
(Drew Angerer)

“The failed policies of the Biden Administration and Senate Democrats have stirred the American people into action. Collapsing poll numbers and recent Republican electoral victories have Democrats limping toward a nightmarish 2022. Instead of changing course, Democrats are doubling down on the radical agenda that voters are rejecting. They will be rudely awakened when Republicans take back Congress next year.”