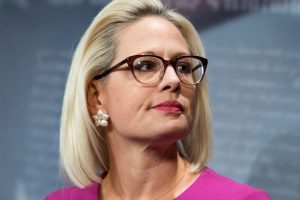 Democratic Sen. Kyrsten Sinema of Arizona on Friday missed the key vote to create a bipartisan commission to investigate the January 6 Capitol riot, despite calling the commission “critical” in pleading for her colleagues to support the legislation.

Sinema was not at the Senate roll call vote and has not yet given a definitive explanation for her absence.

The senator’s spokesperson, Hannah Hurley, told The Arizona Republic on Friday that the senator backed the bill “and has said so publicly, and she will be entering into the Congressional record that she would’ve voted yes.”

On Friday, a motion to invoke cloture and advance the legislation was defeated in a 54-35 vote, garnering the support of all present Democrats and six Republicans, but failing to meet the 60-vote threshold to overcome a legislative filibuster.

Ten other Senators were absent for the Senate vote ahead of the Memorial Day weekend: Republicans Marsha Blackburn of Tennessee; Roy Blunt of Missouri; Mike Braun of Indiana; Richard Burr of North Carolina; Jim Inhofe of Oklahoma; Jim Risch of Idaho; Mike Rounds of South Dakota; Richard Shelby of Alabama; and Pat Toomey of Pennsylvania, along with Democrat Patty Murray of Washington.

Read more: A multitude of Trump-era mysteries are poised to come roaring back into the headlines. Everyone involved is bracing for what happens after that.

The bill to authorize the commission, H.R. 3233, was crafted through a bipartisan deal led by Democratic Rep. Bennie Thompson of Mississippi, the chairman of the House Homeland Security Committee, and GOP Rep. John Katko of New York, the panel’s ranking member.

The House last week passed the bill in a 252-175 vote, with 35 Republicans joining Democrats to support the legislation.

On Tuesday, Sinema and fellow moderate Democratic Sen. Joe Manchin of West Virginia issued a joint statement to their GOP colleagues, imploring them to support the commission.

“The events of January 6th were horrific,” the statement read. “We could never have imagined an attack on Congress and our Capitol at the hands of our own citizens. In the hours and days following the attack, Republican and Democratic members of Congress condemned the violence and vowed to hold those responsible accountable so our Democracy will never experience an attack like this again.”

They continued: “A bipartisan commission to investigate the events of that day has passed the House of Representatives with a bipartisan vote and is a critical step to ensuring our nation never has to endure an attack at the hands of our countrymen again.”

Manchin voted for the commission on Friday and criticized Senate Minority Leader Mitch McConnell of Kentucky for exerting pressure on GOP lawmakers to reject the measure.

Sinema and Manchin have both resisted calls from many of their Democratic colleagues to ax the legislative filibuster, which would allow major legislation to pass with a simple majority, or 51 votes.