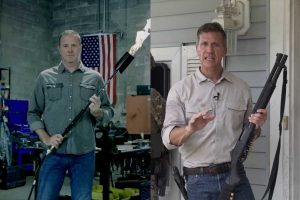 The book promises to call on “American men to stand up and embrace their God-given responsibility as husbands, fathers, and citizens.” He’ll draw upon Greek philosophers, Jesus, and Theodore Roosevelt, his political icon, to give shape to manly traits of “responsibility, bravery, fidelity, and leadership.” It’s an extension on a speech Hawley gave at a conservative conference earlier this year in which he described a society that has demonized manliness, a circumstance to blame for, among other vices, the proliferation of video games and pornography among men.

How True Is 'Respect'? Fact-Checking the Aretha Franklin Biopic

Hawley’s proprietary blend of white supremacy-infused manliness was perfectly encapsulated in the fist pump he offered insurrectionists outside the U.S. Capitol on January 6, 2021 (and later undermined by a video the January 6th committee showed of him running from said insurrections with all the composure of a gangly teenager). Come May 2023, anyone to whom this version of masculinity appeals can wrap their hands around Hawley’s “Manhood” for only $29.99.

“I tell you what,” Kunce, a veteran of Iraq and Afghanistan, says with a folksy lilt. “All the Marines I served with in Iraq and Afghanistan who played video games — you wouldn’t have seen them skittering out of the Capitol the way he did from the crowd he incited. That dude is just a complete phony, through and through.”

Trump’s own obsession with some bygone stereotype of masculinity has inspired an army of strivers trying to enhance their political fortunes by matching it. The chauvinistic byproducts have manifested themselves in GOP campaigns across the country, but especially in the race for U.S. Senate in Missouri, where candidates refract his tendencies, whether through violent bravado or pressing through scandal. The trend has had its counter effect on the Democratic side, in which “manly men” — such as Kunce or Pennsylvania’s John Fetterman — generate buzz.

Hawley’s absence from the ballot hasn’t stopped his shadow from looming over the race to replace Sen. Roy Blunt (R-Mo.). Eric Greitens, the former GOP governor who resigned after being accused of sexual assault and campaign finance crimes, has an ad that showcases him showering bullets out of his semi-automatic rifle yelling, ‘Liberals, beware!” Eric Schmitt, Missouri’s attorney general and another GOP frontrunner, promised to take his (literal) blowtorch to “Biden’s socialist agenda,” a vow that earned admiration from Sen. Ted Cruz (R-Tex.) and his own equivocal brand of machismo. Trump rewarded both candidates’ efforts to make themselves in his image by endorsing “ERIC” on Monday night. Neither let the ambiguity stop them from proclaiming himself the real Eric.)

Kunce, in his own primary fight, has presented a  Democrat-informed manly counter and to call out the “fake masculinity” of his GOP rivals. “These guys are always running around with guns, blowing up the next biggest thing, getting out flame throwers, everything else,” he explains. “That’s not what I would consider masculinity at all. It’s this performative craziness.” He has his own gun-toting ad — one in which the strapping 6-foot-2 vet assembles loads an AR-15, but refuses to shoot. “Stunts like that are for clowns on the other side,” he says in the ad.

He nevertheless maintains that checking Trump-inspired bravado is not the focus of his race. His particular antidote is liberal populism that channels rage toward corporate monopolies and Big Tech, which he blames for hollowing out the middle class. Silicon Valley has drawn Hawley’s ire, too, but from the standpoint of fear mongering over their immigrant workforces and superficial liberal values. “I present myself as a populist and some people are like, ‘Oh, populism, I don’t know about that. Isn’t that Josh Hawley and Donald Trump or Eric Greitens?’” he explains. “No!”

When posed with the fact that Missouri is an increasingly red state, and that 2022 is shaping up to be a particularly red year, he points to another veteran-turned-Democratic-candidate who gives him hope: Jason Kander, who lost his bid for U.S. Senate by less than 3 percent of the vote the year when Trump trounced Hillary Clinton by 16 percent. The Democratic Beltway class could hardly contain its excitement with Kander, a veteran of the war in Afghanistan, assembled an assault rifle in early advertisement. But that was a national fundraising pitch, Kunce explains. “What he ran here in Missouri was that Roy Blunt’s wife was a corporate lobbyist,” he says. “That’s the only path to winning here.”

If Kunce is taking on Trump’s faux populism, Greitens is channeling the former president’s scandals, as well as his knack for outrunning them. Indeed, Greitens held a lead for much of the race — even after his ex-wife accused him of hitting her and his young son in a sworn affidavit. (He denies this — calling it a “RINO attack” in a video — and still maintains partial custody of his two children.) He doubled down on the violence-infused politicking with an ad depicting him conducting an armed raid to go “RINO-hunting.” But the ad was quickly followed by a flood of negative advertisements and mailers against Greitens, correlated with the former governor’s fall in the polls.

Schmitt, meanwhile, has talked about being a “disruptor” with all the swagger of the former president as he repeatedly sues the federal government to halt Biden administration guidance from taking hold in the state. The rebrand created ample distance from his former state Senate self, who earned high praise for cooperating with Democrats — so much so that he earned endorsements from labor unions.

Their ambitions in both parties, however, could be upended by women candidates. Hawley rejected the race’s manly men in favor of Rep. Vicky Hartzler (R-Mo.), who distributed a mailer depicting her pointing a gun at a torso-shaped target days after the elementary school massacre in Uvalde, Texas. (Until Trump’s endorsement, Greitens, Hartzler, and Schmitt had all been considered frontrunners.)

Meanwhile, in the Democratic primary, Kunce’s toughest challenge comes from Trudy Busch Valentine, a registered nurse and heir to the Anheuser Busch fortune who has funneled $3 million of her own money into the race and has barely edged out Kunce in some recent polls . Last week, she appeared to voice opposition to “critical race theory” — the shorthand for diversity and inclusion curriculum and a position most commonly associated with the right — and claimed ignorance of Citizens United, the Supreme Court case that allowed for unlimited funds to be spent in federal elections.

One notable manifestation of manliness Missouri voters have not embraced: Mark McCloskey, the St. Louis lawyer who embodied aggrieved whiteness when he brandished an assault rifle at Black Lives Matters protesters from his front yard in August 2020. Polling has shown McCloskey, who spoke proudly of his actions at the 2020 Republican National Convention, with single-digit support.

Missouri Republicans, it would seem, prefer candidates who wield weapons in television advertisements, not real life. For now, anyway.