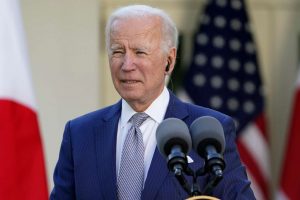 “I greatly appreciate the chance to spend time with you in person and to make our exchange of ideas face to face,” Biden said during a formal press conference in the Rose Garden. “There’s no substitute for face-to-face discussions.”

The visit capped off a week of major foreign policy decisions from the president, announcing all U.S. troops would leave Afghanistan by Sept. 11 and imposing wide-ranging sanctions on Russia over election interference, hacking and other “harmful foreign activities.”

But it also came on the heels of the latest deadly mass shooting in the U.S. after a 19-year-old gunman killed eight people at a FedEx facility in Indianapolis Thursday night.

“Last night and into the morning in Indianapolis, yet again families had to wait to hear word about the fate of their loved ones,” Biden said in a statement. “What a cruel wait and fate that has become too normal and happens every day somewhere in our nation.”

Biden ordered flags to be lowered to half-staff at the White House, making it the third time in his presidency he’s done so for a mass shooting, and a week after he rolled out limited actions to address gun violence in the country. He grew defensive Friday afternoon when asked in the Rose Garden whether he felt the need to reprioritize his legislative agenda, and to place gun reform ahead of his current push on infrastructure, saying, “I’m not gonna to give up till it’s done.”

“I’ve never not prioritized this,” Biden said. “No one has worked harder to deal with the violence used by individuals using weapons than I have.”

The Democratic-controlled House has passed two gun-control bills and Biden urged the Senate “to step up and act,” reiterating his support for universal background checks, among other reforms.

“I strongly, strongly urge my Republican friends in the Congress who even refused to bring up the House passed bill to bring it up now,” he said. “This has to end. It’s a national embarrassment.”

Suga also weighed in on the latest shooting during a meeting earlier in the day.

“I would like to express my condolences to the victims and my sympathies to the families,” he said. “Innocent citizens must not be exposed to any such violence.”

A recent Quinnipiac poll found that 89% of Americans support requiring background checks for all gun buyers, which is similarly high among Republicans at 84%.

During their meetings throughout the day, the two leaders said they spoke about a number of issues, including the COVID-19 pandemic, climate change and how they could take on challenges from North Korea and China.

“We’re gonna work together to prove that democracies can still compete and win in the 21st century,” said Biden. “We can deliver for our people in the face of a rapidly changing world.”