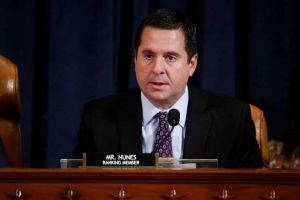 Rep. Devin Nunes, R-Calif., will receive the Presidential Medal of Freedom during a ceremony at the White House on Monday, Fox News has learned.

A source familiar with the matter said other Intelligence Committee members will also be in attendance. He was once the chairman of the committee.

Nunes has been a vocal critic of Special Counsel Robert Mueller's investigation into Russian meddling in the 2016 presidential election.

President Trump first mentioned the possibility of giving the military's highest civilian honor to Nunes during an interview on "Fox & Friends" in 2018.

"If this turns out as everyone thinks it will, Devin Nunes should get the Medal of Honor," Trump said. "What he's gone through, and his bravery, he should get a very important medal…Maybe we’ll call it the Medal of Freedom because we actually give them – they’re high awards for civilians, and he’s done amazing."

In addition, Rep. Jim Jordan, R-Ohio is expected to receive the Presidential Medal of Freedom during a separate ceremony at a later date next week, according to another source familiar with the matter.

Jordan told "Sunday Morning Futures" that he would spearhead an effort in the House of Representatives objecting to the certification of the presidential election results on Jan. 6.

Fox News' Chad Pergram contributed to this report. This is a developing story. Check back for updates.