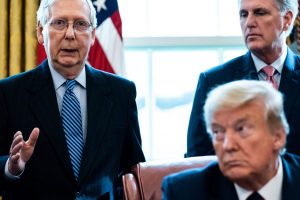 The Senate Republicans’ campaign arm announced on Monday that it had presented former President Donald Trump with a new award over the weekend. Trump spent part of the same weekend attacking the top Republican in the Senate, Mitch McConnell, during an expletive-laden speech to GOP insiders.

Sen. Rick Scott, a Florida Republican, gave Trump the Champion for Freedom Award on behalf of the National Republican Senatorial Committee (NRSC) and praised him for “appointing three pro-Constitution judges to the Supreme Court, cutting taxes for middle-class families and job creators, and securing the border.”

“President Trump fought for American workers, secured the border, and protected our constitutional rights,” Scott said in a Monday statement.

On Saturday, Trump launched a full-scale attack on McConnell during an hour-long speech to lawmakers and donors at his Mar-a-Lago resort. He called his former top ally a “dumb son of a bitch” and a “stone cold loser” for accepting the results of the 2020 presidential election, which Trump and many Republicans have falsely claimed was “rigged” by Democrats.

“If that were Schumer instead of this dumb son of a bitch Mitch McConnell, they would never allow it to happen. They would have fought it,” Trump said of the election certification.

Trump also went after McConnell’s wife, Elaine Chao, who served as his transportation secretary until she resigned the day after the Capitol riot.

“I hired his wife. Did he ever say thank you?” Trump said, according to The Washington Post.

The GOP leader has refused to comment on Trump’s attacks.

Relations between McConnell and Trump soured following the Jan. 6 Capitol riot and the Georgia Senate runoffs, which handed control of the chamber to Democrats. After McConnell said Trump was “practically and morally responsible for provoking” the Capitol siege, Trump called the Senate leader a “political hack.” But for four years, McConnell played a key role in passing Trump’s agenda, including major tax cuts and record judicial confirmations.

“I wish that Mike Pence had the courage to send it back to the legislatures … I like him so much,” Trump said. “I was so disappointed.”