“President Trump is a proven champion for all Americans,” Scott, who serves as chair of the committee, said in a statement. “Throughout his administration, he made clear his commitment to getting government out of the way of people’s success, paving the way for American families and job creators to reach new heights.”

If you’ve never heard of the “Champion for Freedom” award, that’s because it hasn’t existed before. The small, ceremonial dish sounds like a made-up gesture designed to placate an angry former president who spent the weekend fuming at GOP leaders ― including Senate Minority Leader Mitch McConnell (R-Ky.) ― and lying about the 2020 presidential election, lies such as those that led to the deadly Jan. 6 attack on the U.S. Capitol. 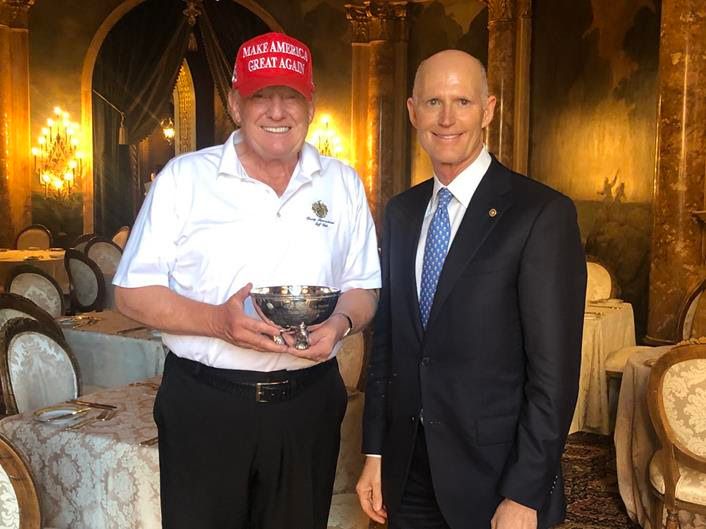 Trump, of course, famously loves receiving accolades of any size ― even nonexistent ones.

For Scott, a potential 2024 presidential candidate, keeping Trump happy and taking back the Senate in 2022 are top priorities. The former president has already pledged to campaign against Alaska Sen. Lisa Murkowski (R) over her guilty vote in Trump’s second impeachment trial earlier this year. He’s also demonstrated his continued influence over the party, distributing highly sought-after endorsements to his most loyal supporters in Congress.

But the NRSC’s flattery of Trump is more than a little awkward considering that McConnell, the top Republican in the Senate, fiercely criticized the former president over his role on Jan. 6, saying he was “practically and morally” responsible for the attack. (Nevertheless, McConnell voted not to convict Trump and later said he’d “absolutely” support him if he becomes the GOP nominee in 2024.)

Over the weekend, in a speech to GOP donors in Palm Beach, Trump unloaded on the Kentucky senator anyway, calling him a “dumb son of a bitch” and a “stone cold loser.” Trump added that “a real leader” never would have accepted the presidential election results.