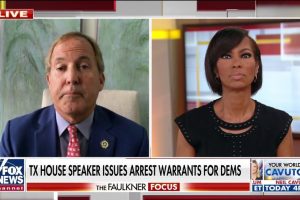 In the wake of Gov. Greg Abbott’s May ban on mask mandates by any government entity, including counties, cities, and schools, the courts have been embroiled with legal battles.

Over 120 schools have defied Abbott’s ban and implemented mask mandates for students and teachers returning for the fall term and nearly 100 schools have either recently received letters of complaints from the attorney general’s office or are already in a legal battle with the state.

“The Texas Supreme Court has sided with the law, and the decision to enforce mask mandates lies with the governor’s legislatively granted authority,” Paxton said in a statement. “Mask mandates across our state are illegal, and judges must abide by the law. Further non-compliance will result in more lawsuits.”

Some school districts have argued that the governor has exceeded his authority issued to him under the Texas Disaster Act, which grants Abbott broad powers during emergency situations.

Abbott sought to solidify his order by having the GOP-controlled state legislature send a bill to his desk that would further bar government entities from implementing coronavirus-related mandates.

But the push by the governor never gained much traction during a recent special session called by Abbott, reported the Texas Tribune.

A bill by GOP Rep. Jeff Leach, that would have brought the slew of court cases to a close, failed in the state’s House of Representatives and the Texas Senate never saw a companion bill.

Texas has seen one of the largest spikes in coronavirus cases in the nation with the spread of the delta variant.

The state neared peak levels of confirmed cases earlier this week with more than 25,000 cases reported Wednesday and over 19,000 new cases confirmed Friday – a caseload not seen since the state’s previous peak in late December 2020 when Texas saw 27,000 cases in one day.